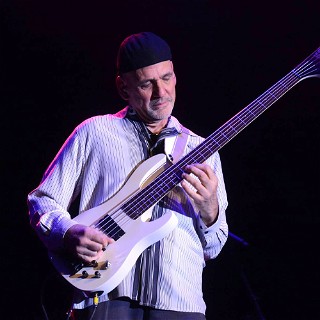 Jeff's Story (in a million words or less)

Born in Washington, D.C., Jeff Ganz became a New Yorker at age 13. A year later, he began performing professionally as a guitarist/vocalist in the Hendrix/Clapton tradition.

At 20, Jeff made the decision to master the bass, as it represented the ideal hybrid between harmony and rhythm, guitar and drums. He studied piano with his musical mentor Bob Weiner and upright bass with renowned bass experts Bill Pemberton, Clyde Lombardi, Homer Mensch, and Derek Jones, a virtuoso on both acoustic bass and bass guitar. To build a more solid foundation on the electric bass, he turned to the highly respected guitarist and film composer Ira Newborn and jazz giant Jeff Andrews. Jeff also studied drums with Gene Morvay, Ben Gramm, Tony Tedesco, Frank Bellucci, and Don Guinta.

Jeff has always been driven to push the envelope beyond what everyone expects. Every great musician has their own sound, and Jeff is no exception. His signature style provides propulsive accompaniment on both bass and drums.

On Being a Sideman:

As a sideman, it's important to always be aware of whose name is on the ticket. And, no matter what you're doing, you've got to play what is appropriate for any given situation. I've been fortunate to amass a wealth of diverse musical experiences, and it's definitely made me more proficient on many levels. When you find yourself in situations that are more spontaneous, I let the music itself tell me what needs to be done. No matter what I play, I'm always hoping to be as good as the music, and serve it in the best way possible.

Johnny heard me when I was playing with Roy Buchanan. He was friendly and reserved when we met, but musically, we clicked quickly. He was really intrigued with the 8-string. Johnny once told me that he considered himself more of an entertainer than a musician. One could take a comment like that to be self-effacing from such a guitar giant, but it helped me to find my niche in his band right away. He wanted an accompanist, not a competitor. I played a bunch of different basses and did some featured vocals, and was very pleased that Johnny trusted me to play the right stuff for his music. I recorded two Grammy-nominated CDs with Johnny, Let Me In, and "Hey, Where's Your Brother?" I was also extensively interviewed and included in the book "Raisin' Cain, The Wild And Raucous Story Of Johnny Winter".

Working with a legend is always a great experience. He was a man who certainly lived the blues. Although I only got to record with him once, (the whole session took 45 minutes from start to finish) it's something I'll always be proud of - and the CD (Mr. Lucky) was Grammy-nominated!

I got this gig through Charlie Frazer, a guitarist friend who put backup bands together. At the rehearsal, Chuck gave me his instructions: 'When I put my foot up, you play. When I put my foot down, you stop. See you tonight!!!"

At the time Roy and I started to work together, he wasn't carrying a band. I got the call to do a date with him opening for Robin Trower at the Capitol Theatre in Passaic, N.J. That began my two-year association with Roy, a guitarist's guitar player. Roy was always happy to play anytime and anywhere. I was too, because Roy's music really gave me an opportunity to stretch out. It was balls-to-the-wall blues, but with lots of surprises.

We were on the road I got to know Roy pretty well. Along the way, we discovered that we were both huge fans of the Bowery Boys movies. Roy's generosity turned out to be something special for me; he gave me a Bowery Boys anthology book. I asked him to autograph it; he was flattered, but wouldn't do it! If you want to know more about him, "Roy Buchanan: American Axe" by Phil Carson is an excellent read.

One of my first unforgettable experiences in the music business was playing at the Concord Hotel in the Catskills with Ben Vereen. It was tremendously inspiring playing electric bass with a 26-piece orchestra behind such a magnificent talent. I was always an admirer of his work, and accompanying him was really something special. Ben was a consummate performer with great orchestrations, and a warm and cordial man as well. I ended up playing bass on his Christmas CD 25 years later!

I loved the feeling I got when my parents took me to musicals. My mom took me to see "The Music Man", and my dad took me to see "Annie Get Your Gun", starring Ginger Rogers. I always wanted to replicate that indescribable feeling, and pursued playing in Broadway orchestras, both on stage and in the pit. I've worked in close proximity to legendary composers and conductors, such as Andrew Lloyd Webber, Jim Steinman, Roger Miller, Galt McDermott, and James Radio. Musical input was encouraged in some of these situations, and I was exhilarated when ideas I suggested ended up as part of the score. 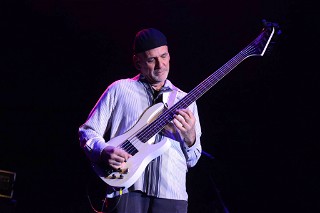 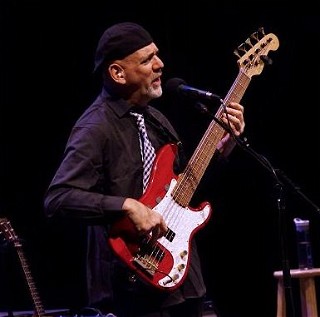