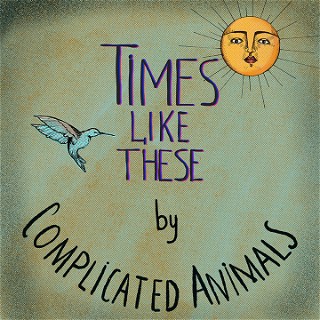 Complicated Animals have released an intimate, acoustic take on "Times Like These" by Foo Fighters. The Brazilian American duo gravitated toward the track, because the lyrics are in line with the events of this year. Monica and Chad had this to say about their new single. “This year sure has been crazy. We’ve all had to slow down, and focus on familial relationships, and close friendships. We believe that these challenging times are the times that shape us. The most important thing we can do right now, is just be there for each other. We hope to inspire people with some positivity. The world needs more of that. We’re collaborating with a talented Brazilian artist named Karla Caprali. She has created the song art, and is working on a powerful visual (animated video) to go with the track. We're staying hopeful for the future. As Oscar Wilde said, ‘Behind every exquisite thing that existed, there was something tragic.'"

Background
Complicated Animals’ self-coined Indie Nova genre beautifully showcases the magic that happens when Indie Pop & Bossa Nova come together to tell a story. Monica da Silva & Chad Alger met while living in Chicago in the winter of 2008. They survived the blizzards, by drinking red wine & black coffee. Somewhere in that haze, Chad picked up a guitar, Monica made up some lyrics, and the songs they crafted transported them far away from snow, to the beaches of Brazil.

Their first album “Brasilissima” came out under da Silva’s name in 2010. It featured songs in both of Monica’s native languages, English & Portuguese. The first single "Aí Então”, was picked up by Putumayo World Music for their compilation “Brazilian Beat," and the psychedelic track “That’s Not The Way," pumped up the crowds during The World Cup in Brazil in 2014.

Monica and Chad released their EP “In This Game” under the name Complicated Animals in 2015. Written and recorded in a cabin in the woods in Michigan, “In This Game” was called “a 6 song masterpiece” and the “beginning of a new sound” by PopMatters. The first single “Phoenix” was featured in the 2019 Netflix Original Movie The “Last Summer."

Where You've Heard Them