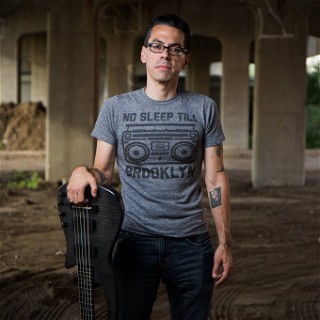 With five solo albums under his belt, Jonathan Moody is taking a different approach to the term "solo bass." Focusing on through-composed songs and pieces that skirt the line between technical prowess and melodic depth, Moody approaches the instrument more as a folk artist over a jazz soloist. Using a number of effects (and the occasional drummer), Moody is an instrumental storyteller, leading the audience on a roller coaster (sometimes literally, as "Mean Streak" is an ode to one) of technique on the electric bass guitar.

When not performing solo, Moody is an in-demand freelance bassist in the midwest, playing for "whoever asks first." Not bound by musical genres, Moody is equally at home in a blues gig, cover band, kirtan or even musical theatre pit (doubling on electric and upright basses). Moody brings a strong foundation and tonal footing to any gig he shows up for.

At home in Kalamazoo, MI, Moody is a dad to two awesome kids (one of which is starting their own musical journey), a coffee and taco enthusiast and occasional cartoonist/illustrator.

February 19, 2021 23:20
What you are describing (pressure on the nut from the string) is a result of the angle of the string, and not the string itself. A headstock that isn’t properly designed with the angles for strings will have this issue, no......Read more

February 19, 2021 22:13
Jovan, it will not cause issues with the nut or tuning stability. I've done it many times (either for testing or real-life gigging situations) and those concerns don't exist. It is the same concern people have with our......Read more

February 19, 2021 19:58
Hi Jovan, thank you for your feedback. You shouldn't have to pitch them; they'll still fit on your Fender at that winding length. The full diameter of the E string does wrap around the tuner, but it will not cause any duress......Read more