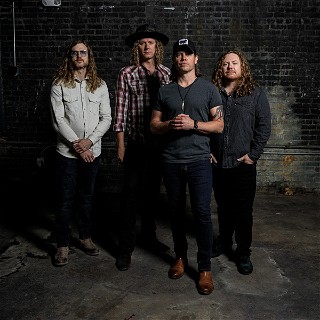 Wayland is working class country music from a town of the same name in West Michigan. Lead singer Mitchel Arnold and lead guitar player Phillip Vilenski met when touring the world teaching children music with Bill and Robyn Brawley of the international performance group Heart Global. They left that experience with their first batch of songs and set off to build a fanbase that nobody could take away from them.

They toured the country independently for seven years selling out venues as a headliner all over the midwest, opening for cross over acts like Aaron Lewis, Colt Ford, Lifehouse, and Blackberry Smoke all while securing slots on major, national festivals. They built relationships with radio stations all over the country by singing three part harmony at seven am live on air on radio and television.

Cumulus, iHeart, Sirius XM and even the radio team at Capital Records concluded they transcended both genres of country and rock. They have garnered over seven million all time Spotify streams and achieved six charting rock radio singles, four of which made the top forty and two of which the top twenty.

The greatest part about Wayland is the Wayland Warriors, the self named, dedicated and devoted fan base that sings every word, travels to every market, and chants "THIS IS WAYLAND COUNTRY" anytime they enter a venue.

The band has been in Nashville writing and recording for the past six months and are getting ready to release three back to back anthems this summer followed by their highly anticipated full length album release. It's never been a more exciting time to be Wayland or a Wayland Warrior.