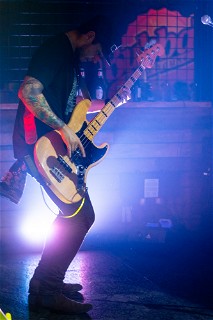 Derrick Herrera, originally from Santa Fe, New Mexico and now residing in Fort Worth, TX, has been known in numerous music scenes from Thrash Metal to Red Dirt Country across the Midwest. Currently touring with Texas Red Dirt Artist Canaan Bryce as "The Lil' Man with a Big Sound" Bass Player. Derrick is slowly making a name for himself in the Texas Country Music scene as the small, long-haired bass player with a big ball of energy to let out each night on stage. Derrick currently plays two Fender American Ultra Jazz V's each night on stage with a multitude of other basses and electric guitars at home to practice with. His amp of choice is Aguilar, which is currently used night after night for all Canaan Bryce shows, but he is no stranger to other amp manufacturers such as Ampeg, MarkBass, and Peavey to name a few.Catch Derrick playing with Canaan Bryce in a town near you, while sharing the stage with fellow GHS String Endorsed Artist Canan Jones on Electric Guitar.