MC Roads to Release New Single, "Smile Like a Knife" 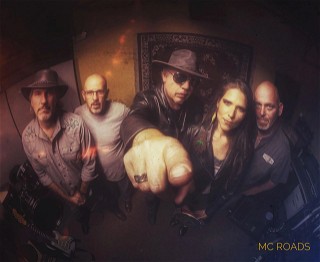 Hailing from Detroit Michigan, Mike Cross is the original founding guitarist for American rock act SPONGE. Now, Cross is the lead vocalist and guitarist for his new band MC Roads, who have recently signed to Golden Robot Records. MC Roads offer up a powerful blend of melodic, guitar-driven music and classic style songs.

MC ROADS are set to release their new single "Smile Like a Knife" on July 12, after recently releasing their debut single "Call it What You Want" through Golden Robot Records.

"Smile Like a Knife" is the second single from MC Roads’ upcoming EP No Nostalgia. Intense musical hooks run throughout this song describing betrayal and greed. Bleed the kindness and the trust of a good friend. Could it be the ‘You're So Vain’ of rock?

ABOUT MC ROADS
As a co-writer for Sponge’s platinum selling album Rotting Piñata, sophomore album Wax Ecstatic and third release New Pop Sunday, Mike Cross helped catapult the band into rock star status with his catchy hooks, iconic crunchy guitar and an undeniable original sound. The band toured extensively, headlining shows in the US and in Europe supporting “A” list artists such as Alice In Chains, KISS and Soundgarden. Mike also appeared on the late night talk show circuit including The Late Show with David Letterman, The Conan O’Brien Show and the Jon Stewart Show. After his departure from the band due to creative and business differences, he turned away from music business to focus on his personal life. However he continued to write, record and produce various music projects and develop his own vocal abilities. Through MC Roads, Mike Cross has created a unique, guitar driven and melodic sound that encapsulates an incredible mix of new and classic style songs.