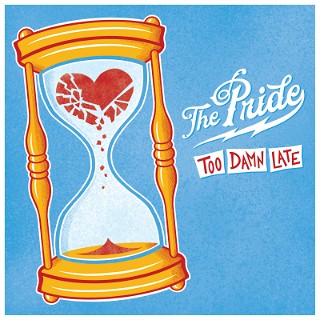 “Who's tired of dudes writing songs blaming girls for all their problems? L.A.-based rock outfit The Pride put a nice spin on that tired trope on "Over Myself." In this jaunty, swinging track, frontman Daniel McGuffey spits venom over what some evil woman put him through—before owning up to his part of the blame.... That mix of bad-scene-everyone's-fault honesty, self-deprecation and fist-pumping riffage was appealing to us… Did we mention the specter of Death makes an appearance to toss around Mylar confetti?” - Alternative Press

On December 11, Los Angeles based alt-rock band The Pride released their EP Too Damn Late, the follow up to 2015’s Yakuzamerica. Listen to Too Damn Late on streaming services today. In tandem with the release of the EP, the live lyric video for the single “Over Myself” is out now. It premiered exclusively on Alternative Press’ Facebook page this morning. Watch the video here. The Pride are entirely self recorded, produced and directed.

On November 13, they released “Over Myself,” the lead single off Too Damn Late. “Over Myself” at its core is a tale of overcoming the denial of suicidal thoughts and coming out clean on the other side. Songwriter Daniel McGuffey penned the lyrics while reflecting on his journey to change self destructive thoughts and behaviors including alcohol, sex and drug addiction. “I still have trouble letting my mom listen to the song,” says Daniel.

The accompanying live lyric video is a DIY quarantine masterpiece, showcasing each band member in their element. Filmed against four vibrant backgrounds in their practice space, they took turns filming and lighting each other. “Everything you see was produced and filmed by us,” says The Pride. Simple, eye-catching, and completely unique, the video adds a bright and humorous tone to the song complete with confetti and special guest, Death. “What was especially fun for us was the literal imagery we brought in to emphasize certain words and lines throughout the song…” says bassist, Justin Emord. “We wanted to tie in the comic book and anime influence in the artwork for the single throughout the video to make something completely on brand for The Pride.” Watch the video for “Over Myself” here.

The EP’s namesake track “Too Damn Late” speaks to McGuffey’s relationship with alcohol and how sobriety and lack thereof affected his personal and professional life. Feeling unmotivated and unable to complete projects, Daniel reached out to a long-time friend who told him to finish just one song, but all Daniel could hear was his own mind telling him “You waited too long to get your shit together. Go back to drinking.” So he listened to his own negative narrative, wrote down the story it was telling him, and finished a song for the first time in three years.

“I quit whisky, quit rye, quit getting high, too. Quit wasting time on games I always lose,” Daniel sings on the chorus of “Quit,” the third song on the EP. At the time he wrote the song Daniel was six months into sobriety, and discovering a sense of optimism as he began embracing a life unhindered by his addictions. He welcomed those changes in his life. However, he was unable to accept or even fathom life without his former spouse. Though he was separated at the time of writing the song, he sincerely hoped his marriage could be saved. “As somebody living with obsessive compulsive behavior,” Daniel says, “No other thought has ever occupied his mind in the seemingly endless way she did.”

The closing track, “Santa Barbara,” is an ode to past relationships and the often painful memories evoked by a summer holiday in a small seaside town. The song features Moxy Anne of Moxy and The Influence on backing vocals.