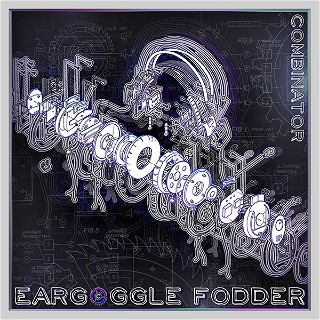 “Sean Fairchild didn’t decide to play bass – the bass decided on him.”- No Treble

On Eargoggle Fodder, Combinator melds melodic progressive metal, synth-funk, soulful vocals, and glitchy breakbeat electronica into a dizzying, post-futurist dreamscape. Schizophrenic, yet born of an overall cohesive vision, the record is at once funky and ornate; the auditory distillation of one man’s wildest melodic hallucinations. Based around the notion of electro-acousticism - the melding and necessary usage of both electronic elements and non-digital sources - Eargoggle Fodder exists at the nexus of the organic and synthetic.

A singing and songwriting bassist, Sean Fairchild is the creative center around which the Combinator universe orbits. Born in Malaysia and spending years living and traveling abroad, he developed a keen taste for the musical forms and tonalities of Asia, Africa, Europe, and South America. Gifted a bass by a family friend at the age of 13 while living in Tokyo, Fairchild studied music and Ethnomusicology at the University of Washington in Seattle.

Combinator began as a trio with guitarist Greg Pascale and drummer Isaac Chirino, based around the of the core concepts of using the bass guitar as a band-leading instrument and the combining of seemingly disparate musical styles and elements. They released an early EP titled Vice & Passion, and a widely distributed full length titled allsound.

“I was always the primary songwriter, lyricist & vocalist” explains Fairchild. “As life changed for Greg and Isaac, they eventually drifted out of full time playing. Combinator became more and more a solo project for me and a rotating collective of co-conspirator musicians.”

Lyrically, Eargoggle Fodder is laced with a pervasive sense of bitter sweetness, reflecting the year of its creation. The record moves through the realms of uncertainty and longing, finally arriving at a sense of self-assured redemption. Give yourself over to the record, and you might just find your own reality transformed.