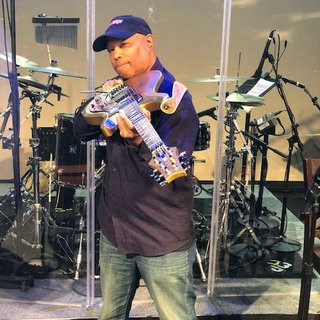 I had a chance to chat with versatile multi- instrumentalist, Fred Campbell, about his go-to pedals, music placements, and his favorite GHS strings. The Clermont, Florida-based Campbell is a regular performer at Universal Studios, and has traveled the world with Disney Cruise Lines. Read more about Campbell’s various musical pursuits here!

You’re a multi instrumentalist (bass, guitar, keyboards). Which instrument did you learn first? What do you find yourself playing more of these days? At least on your social media, I see you toting your guitar a bunch. Actually, my first instrument was the clarinet. I fell in love with the guitar several years later. I spend at least 50% of my time playing guitar, however recently, I’ve been playing keyboards and bass a lot more.

You’ve been getting quite a few placements as of late! Are these primarily cues, full songs, and/or collaborations? Can you also explain to those unfamiliar with the licensing process how you go about placing your music? Music Licensing, in a nutshell is an agreement between songwriter(s) and a Music Licensing Company, which authorizes the use of a specific piece of “Copywrited Music” for use under a specific set of circumstances. I’ve been doing mainly cues.

For example, I recently did music for a TV Show called “Saints & Sinners.” The music supervisor requested a full song for the show. However, they only aired about 30 seconds of the song. Soon I’ll be submitting a full song for a movie that will be released in 2019.

I do quite a bit of collaboration on these projects. My Production Team includes: Grammy-nominated Producer, “Jamezz Bonn” and a super talented keyboard player named Jermaine Tate.

Recording wise, what is your favorite plugin right now? Currently, my favorite plugin is a keyboard plugin named “Dune 3.” By Synapse Audio. It’s got all of the components that you need for a World Class Production: Great arpeggiators, Powerful Synths, Beautiful Effects, and over 1,000 sounds. My favorite DAW is Presonus Studio One 4.

By the way, I’m currently creating a Loop Library for Presonus/Studio One. It’s going to be called “Platinum Sessions”, because most of my friends who are contributing content for this library have either recorded with, produced, or toured with a Platinum selling artist. I'm using Chance Howard, who recorded and toured with Prince. Morris Pleasure, who played with Earth Wind & Fire, and in Michael Jackson’s “This Is It” band. Jamezz Bonn, who co-wrote the Flo Rida mega hit “Low” and Skip Dorsey, who toured with Justin Timberlake, to name a few.

My favorite guitar plugin is the Waves PRS SUPERMODELS Plugin. It has pristine cleans, and devastating dirts! I own a PRS Archon Amp, and this plugin replicates the amp very well! 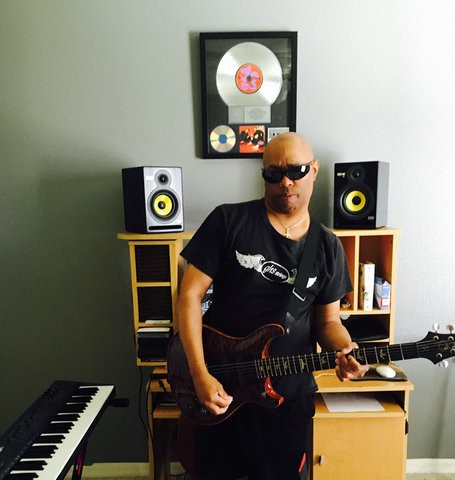 What is your pedal train looking like these days? Any cool and unique pedals you can recommend? Right now, my PedalTrain consists of 2 items: The Fractal Audio "AX8” which encompasses every Amp, Pedal and Effect, that I could imagine using, and The Mission Engineering EP 1 Expression Pedal, which lets me control different variables, such as Delays, Revevbs, Pitch, Distortion, Volume ect…

I highly recommend The AX8. It sounds incredible Live and In The Studio. I also love my “Sweet Tea Overdrive/Distortion Pedal” By JHS Pedals. It pretty much covers the spectrum of Distortion Sounds!

Later on, I met a musician at Universal Studios named Tony Aleguas. Tony asked me to play at Universal Studios, with his band called “The Modern Mystics;” we play World Beat Music and wear colorful costumes. I play a “Roland GR 20 Guitar Synth” on that gig. I use mostly Sitar, Sting, and Pad Patches. I love playing with The Modern Mystics. I’ve been playing with them for over 10 years; they are an incredibly talented group!

You’ve performed all over the world, which is quite an accomplishment. Was it for your solo project, Disney Cruise Lines, and/or other artists? When I played on The Disney Cruise Lines, I played with the same band that I performed with at “City Jazz” at Universal Studios. It was called “The Herb Williams Band.” We played everything from “My Girl” to “Jump.” We played on both the Disney Magic, and The Disney Wonder Ships. It was a very unique and fun experience.

You’ve had the opportunity to perform and/or record with the likes of Keith Sweat, Big Gripp, The Goodie Mob, 8Ball and MJG. Who would you say your favorite artist(s) was/were to work with? I’m sure that’s a tough one, but which one(s) would you say you learned the most from or had the most fun with? You’re right; it is a tough question. I’ll have to say Keith Sweat on the first Dru Hill Album. Dru Hill was an unknown group that Keith Sweat was producing. We had no idea that The Dru Hill Album would achieve “Platinum Status.” However, what really made this project so special to me, was that my childhood friend Allan “Grip” Smith, (who was a producer on the project) called me to play guitar on the album. It was the first time that Allan and I recorded together. Allan is such an incredible musician. He could have called anyone to play on the project, but he called me, so that really means a lot! I also had fun touring with Blues Great “Clarence Carter.” The guys in the band were hilarious.

Which GHS strings are you currently rocking? For Electric, I’m loving the Progressives. My friend Tony Pasko, who wrote a lot of music for Duck Dynasty, Shark Week, etc highly recommended the “David Gilmore Set”, so I’ll be placing an order for them soon. For bass, I’m currently using Balanced Nickels, which were developed by Jonathan Moody. It’s a very versatile sounding string. For acoustic I use: Americana Series, Phosphor Bronze and White Bronze. I’m going to try The Bass Progressives; I can’t imagine how incredible those will sound!