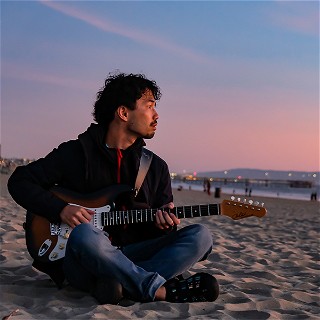 Tetsuya was born in Kamakura City, Kanagawa Prefecture, Japan, and began playing guitar as a teenager. He attended Senzoku Gakuen College of Music, where he performed as a member of the jazz big band. Just months after graduating in 2017, he moved to Los Angeles alone.

During his time as a student at the Musicians Institute Hollywood, he became the house guitarist at Unity Church in Compton, performed with the headlining band at the Ponderosa music festival, and participated in various recordings.

After then graduating in 2019, he was invited to tour with US rock band Sayed Sabrina as a guitarist.

Between performances, he composes and records musical scores for independent animated films, some of which have been screened in Los Angeles, New York, and Vancouver cinemas.