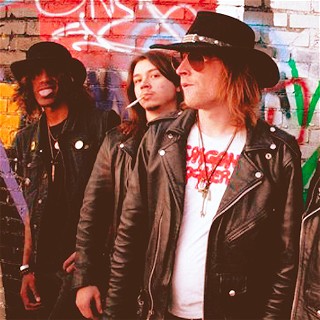 Pröwess is a straight-on rock 'n' roll band hailing from the Charlotte, NC area. In a little over two years they have toured the U.S. extensively from coast to coast and have amassed a loyal following in all corners of the country with their killer live show that throws a nod to the legendary hard rock bands of the late-70's. All over the country they have pulled into towns where they were previously unknown, plugged in their amps and thrown down frenetic, sweaty, bluezy, booze-soaked sets that have won over the rooms, ensuring the next time through that the word had gotten around! This old-school approach has worked like a charm as the band have become a major draw in several markets throughout the country. Pröwess are no strangers to the ups and downs of rock n' roll either! Their social pages are chock full of viral videos of their on-the-road shenanigans such as the time Kenny Mange [bassist] fractured his finger on tour and the band was able to crowdfund over $4,000 in a mere 6 hours to pay for emergency surgery! Or how about the time the band's RV was stolen on tour with members still inside, allowing them to apprehend the thief! Video footage of the aftermath went viral and garnered over 25,000 views on Facebook in just a few days and was published on sites such as Altpress.com and MetalInsider.net!

Their newly released live EP "Roll'n with the Punches" (2018) is a testament to why this band is catching fire. The self-produced EP showcases this young band in the heat of a frenetic set and is chock full of the type of good time rock 'n roll songs that have become staples in their set. They are currently hard at work in the studio recording their debut studio full length with producer Tuk Smith [BITERS] and a Grammy-winning sound engineer. This is a band with an old school flare that has found an incredibly modern way of reaching people. In a world of cookie-cutter soundalikes, Pröwess has been able to transcend the orthodox, foregoing the tired ways of most bands and inviting the world into their lives night after night, all while putting the rubber to the road to go out and earn new fans the hard way. Their loyal fan base, affectionately dubbed the Pröwess Tribe, is proof of their efforts. Their core fan base is a tightly-knit family of ardent supporters with a high level of engagement on social media and at live shows, and it grows by the day. One thing is for sure, Pröwess is a band to watch!