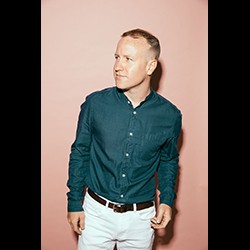 Panama Wedding has quickly established itself as one of the most promising indie artists of the year with "All Of The People," a deliriously joyful pop single that has been hailed by music outlets around the globe and has earned over 400,000 plays on Soundcloud. But Peter Kirk, the New York-based mastermind behind Panama Wedding, is not dwelling upon the buzz garnered from his musical outfit's breakthrough track; instead, Kirk is preparing a rich career full of expertly crafted songs that defy categorization, and a live show that grows more muscular as his audiences swell. "All Of The People" is an enduring anthem and envious first act, but Kirk -- newly signed to Glassnote Records and readying his debut EP -- has much more up his sleeve.

"There's a generally hopeful tone to 'All Of The People' -- it was written in the wintertime, and I wanted to reflect that feeling of spring turning into summer," says Kirk of the song, which is built on a foundation of effervescent vocals and opulent synths. "But 'All Of The People' is just one song, and there's this whole other body of songs I've written that I want to focus on and share."

Kirk's success as Panama Wedding comes after a lifetime of tinkering with different sounds: as a classically trained pianist growing up in Long Island's Oyster Bay, Kirk made a habit of recording songs in his bedroom with his friends. When he moved to New York City as an adult a few years ago, Kirk rented a studio in midtown Manhattan to continue exploring writing and recording music, if only as a hobby at the time.

Holding down a full-time job, Kirk would plow through 11-hour workdays before heading to his studio and honing a concoction of pop, adult-contemporary and electronic music. "For about two years, I went there every night after work, and would just try to write and record and put together something," recalls Kirk. "At this point, I was just sending music to my friends under my name, rather sheepishly wondering whether or not they would like it. Over time, the responses went from, 'Hey, this isn't bad,' to 'Wow, this is really good!' Then, random friends of friends started reaching out to me independently, asking, 'Who are you? What is this?' They wanted to find out more."

Kirk decided to take his music on the road, and stayed patient while looking for local opportunities. His first gig, at a DIY east Brooklyn venue, was viewed by just one of friend in the audience, but Kirk's crowds started growing as he became more comfortable under the bright stage lights. His live setup also evolved from a one-man show with a laptop and keyboard construction into a proper band setup, with a bassist and drummer supporting his expansive vision.

Eventually, Kirk got noticed by Seth Kallen, a Brooklyn-based manager, who suggested that Kirk produce a new version of "All Of The People" and release the polished track as Panama Wedding's debut single. Kallen gave the mixing duties to budding producer Andrew Maury, formerly of RAC, who has worked with bands such as Ra Ra Riot, Givers, Tegan & Sara, and High Highs. Maury "knocked it out of the park," says Kirk. The new version of "All Of The People" was released online in July 2013 and exploded on impact: the single reached No. 1 on Hype Machine in a week's time, earned raves on tastemaker sites like Indie Shuffle, Neon Gold, and Crack In The Road while earning thousands of streams in a matter of hours.

After a string of acclaimed sold-out performances during the CMJ Music Marathon in fall 2013, Panama Wedding finalized a deal with Glassnote Records, aligning Kirk's project with the company behind best-selling artists like Mumford & Sons, Phoenix and CHVRCHES, among many others. Kirk has previewed Panama Wedding's debut EP, due out in spring 2014, during sold-out performances opening for artists like St. Lucia and HAERTS -- a far cry from Kirk's one-person audience at his first show just a few years ago. More music fans will get their Panama Wedding curiosities piqued at South By Southwest, full U.S. spring tour with RAC & Dan Croll, and then at multiple festivals this summer.