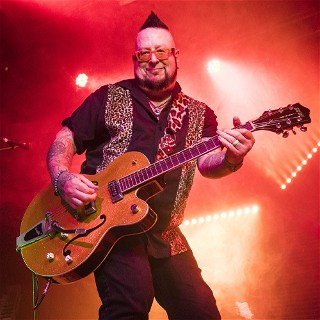 Mohawk Mike McAfee plays guitar because of Duane Eddy, it’s that simple. Growing up in the 70’s and 80’s exposed Mike to incredible bands and musicians. He was immediately attracted to guitar playing and song writing, and got an acoustic guitar from a neighbor to start on. After discovering that this instrument didn’t deliver anything like the sounds he heard on albums from KISS, Rainbow or Led Zeppelin, Mike wanted to move from his acoustic guitar to an electric one. His father told him he’d have to learn Rebel Rouser by Duane Eddy for this to happen. Mike had never heard of Duane Eddy but grudgingly put the record on to learn “his dad’s music”. From the first bend it was over. Duane Eddy WAS guitar to Mike, and that’s still true today.

By the late 80’s Mike was releasing original music with bands he formed. The twanging tones of Duane Eddy weren’t prominent, but the foundation remained. As time passed, the appeal of original music faded a bit as the desire to play in front of big crowds became his goal, so 22 years ago, Mike started the band Eight Inch Elvis as a vehicle to play in front of as many people as possible, and it’s done that very well. Big crowds, big success, but the style of music still wasn’t what was in his heart. In 2016 Mike re-formatted Eight Inch Elvis as the Rockin’ Rockabilly show band he’d dreamed of and it’s been all uphill since. Celebrities, Governors and crowds up to 40,000 have danced and sang along with the group. The band has been contracted to write theme songs for television shows and annual festivals, but 2021 marks the debut release of Eight Inch Elvis original music on vinyl and CD.