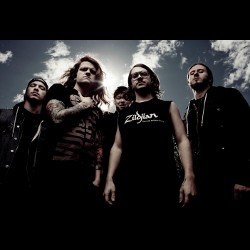 Album titles can be quite a dicey proposition. In a perfect world, the title should tell you something about what kind of action awaits inside the jewel box (or the album jacket). There’s not much room for error when you pick up Slayer’s Reign In Blood or Katy Perry’s Teenage Dream; you pretty much know what you’re getting into, either way. Which is why you should pay close attention to the title of the new album from modern metal mavericks Miss May I. The band may have recorded in a studio, but the title At Heart tells you everything you need to know about where those songs actually came from.

“I feel like there are a lot of ways for a metal band to sound played-out,” offers Miss May I frontman Levi Benton. “One of the biggest ways is the whole ‘hate’ thing. It bums me out when I’m listening to a band I like and the lyrics are along the lines of ‘I hate you.’ They’re doing what every other metal band in the world are doing by cheesing it up like that. On At Heart, we wrote about things personal to us. It wasn’t like I was trying to write something that sounded ‘cool’ and ended up spending days on it. On these songs, I thought, ‘This is something I’ve been through,’ and could put the lyrics down in two hours. We’re really proud of what we’ve done on At Heart—and we’re proud of the trip we went through to get here.”

Don’t make the egregious mistake of thinking the boys of Miss May I turned into soft prima donnas. The band—Benton, guitarists Justin Aufdemkampe and B. J. Stead, bassist Ryan Neff and drummer Jerod Boyd—have been playing it lean and mean since their inception in Troy Ohio, four years ago. Since aligning themselves with respected underground label Rise Records for their 2009 debut, Apologies Are For The Week and 2010's head-swiveling Monument, MMI have always approached their creative process with light-speed. The band usually spent two weeks in the studio with producer Joey Sturgis to hammer out their pummeling metal, thanks to a grueling tour schedule that has them on the road 10 months out of the year. So while harried touring life made them a tight, furious unit, the band felt the itch to go even further as both players and people.

Enter Machine, the acclaimed producer who’s worked with everyone from Lamb Of God (one of Benton’s all-time faves) to Mindless Self Indulgence. The band holed up in his New Jersey studio for two months to make At Heart. While that time frame might sound positively luxurious, the producer spent a lot of time putting the band through their paces. Miss May I were ready to start laying down tracks immediately, but Machine demanded they spend two weeks on pre-production where he could listen to the songs they wrote and tear them apart as needed. Forget the computer enhancement prevalent in today’s music scene: If the band members couldn’t play the parts live, it wasn’t going on the record. Not only did Machine make the band change their way of thinking regarding their instruments, he made a lot of non-negotiable demands on Benton.

“Sometimes he was really brutal with our songs, but it was worth it,” the singer remembers. “We did the vocals on a hand-held mic to get that live-show feeling. His whole thing is feeling the song. ‘What are the lyrics? I want to feel the lyrics!’ He’s all about selling the lyrics and that’s all I concentrate on when I’m playing live. With Sturgis, he’d be like, ‘Your voice is cracking, we’re done for the day.’ With Machine, he’d say, ‘Go get a drink.’ I’d be using the hand-held, and he’d be in his space, moshing around to what I was doing! ‘Come on, it’s like a show,’ he’d say. And I think you can hear that on the record.”

All that’s missing is the stage diving and the moshing: Upon first listen, At Heart is the hallmark for a positively rejuvenated band. First single “Ballad Of A Broken Man” rip-saws any doubts Miss May I would go soft, crossover to the pop charts or (shudder) embrace dubstep. “Hey Mister” details life without a father figure, buttressed by clean melodic vocal verses, the six-stringed bite and Boyd’s piston-pulsing drumming. “Hey, You Are Not Alone” offers a roaring sense of empowerment for youth who feel disenfranchised, replacing that sense of hopelessness with life-affirming rage. “We Lost Our Way” is as close to a power ballad the quintet ever get, starting with anthemic verses and acoustic guitars, only to finish off in high gear. “What A World It Is” sums up the whole Miss May I experience succinctly, where the power manifests itself with Aufdemkampe and Stead’s dual-guitar dynamics, Neff’s nimble figures entwined around Boyd’s wicked kick-drums and Benton’s acumen in delivering death-growls and vocals that practically guarantee the next stop on this journey is the stratosphere. Simply put, At Heart is a bona fide quantum leap for Miss May I.

“Working with Machine made us a better band,” Benton readily acknowledges. “I just want to be in a long-haired, denim-jacket-wearing thrash band. We want to bring back denim jackets with no sleeves and back patches! Nobody is doing that anymore. We’ll go on tour and everybody’s got keyboards and dubstep parts in their music. I don’t want to be one of those ‘blueprint’ bands that get stuck doing the same thing—the same breakdowns, touring with the same three bands—that works for everyone else.”

Benton speaks with the confidence of a man whose convictions are carrying him through life. But you have to wonder why anybody would willingly put themselves through the kind of regimen Miss May I insist on giving audiences. In a world where listeners with a sense of entitlement routinely download music, and another bunch of pretenders with a quarter of the experience are willing to play the same old breakdowns Benton rails against, you have to wonder what is their motivation. Or you could refer back to the album title.

“It’s not about a cash payoff as much as it is a sentimental one,” says Benton, unflinchingly. “All of the things we dreamt about as little metalheads in the basement are coming true. We get to travel the world. Every day is a blessing. Material things like fast cars, big houses and expensive leather boots mean nothing. If there are a thousand kids that know my songs and I get to see them go nuts at a metal show? That’s my reward.” Miss May I’s At Heart. Because whether you’re at the center of your emotional being or stepping lively in the biggest mosh pit you’ve ever entered, one thing is certain: There will be blood.