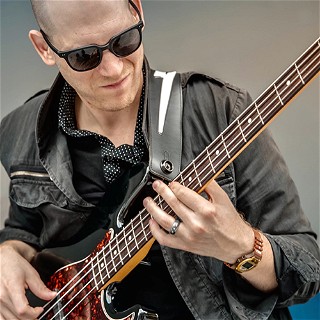 Lawrence has recorded extensively for the award-winning international children’s music program Music Together, where he also works as a Licensing Manager supporting their In-School curriculum.

He has performed at many famous venues including House of Blues Atlantic City, The Copacabana New York, The Stone Pony, and Shanghai Jazz.

Lawrence has been featured in Bass Player Magazine and No Treble. He is an Emerging Artist for Bartolini Pickups & Electronics, and a GHS Strings endorsing artist.

Currently, Lawrence holds down the bass chair for Funk Point 5, Skinny Amigo, and Collaboratory. Lawrence is also an active artist writing and recording original music for a variety of projects. In 2015 he released Anxiety Log, his debut solo album.

He is also an accomplished bandleader and music director for several projects. Lawrence Haber is available for live gigs, recording sessions, and music instruction including clinics.