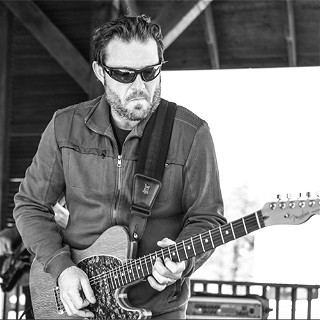 Justin was born and raised in the deserts of West Texas, but currently resides near the swamps of south Louisiana. He began playing guitar at an early age and was heavily influenced by 70's and 80's rock and mainstream country music. He earned an advanced performance certification from Berklee College of Music in 1994 and a B.A. in Music (Classical Guitar Performance) from Lubbock Christian University in 1998. He has taught guitar for over 22 years and has played some of the biggest stages, festivals, and venues, including Wembley Arena, Jazz Fest, Festival International, SXSW, and many others. He records and performs with numerous regional and international chart-topping artists, producers, and multiple Grammy winners. Justin currently maintains his status as one of the top online session guitarists in the world through AirGigs. His styles range from spanking country chicken pickin', metal, pop, blues, classic rock, to galactic ambient sounds, and everything in between, including flamenco, Latin, jazz-fusion, indie, and folk. Justin is referred to as a chameleon by his bandmates and clients because of his ability to jump between and combine so many different styles at once. His clients refer to his service as "The Works" by covering every sound and layer imaginable if the song calls for it. Justin plays approximately 120-150 shows a year with several different groups who play country, funk, blues, pop, hard rock, Americana, Zydeco, Cajun, and alternative. His primary gigs are with the band, Vidalia, and artist, David St. Romain, from Baton Rouge, Louisiana.  He released a solo album titled, 'Line At The Strobe' in 2011.

Thank you for stopping by!  It's an honor to be a member of the GHS Artist family!  Just made my first string order as a GHS artist today, May 13, 2020.  I was down to only 4 packs of Boomers Light 10-46 and two packs of the Extra Light + 9.5-44 with several sessions coming up. You can check out a few songs from my solo album titled, 'Line At The Strobe', released in 2010 here on these YouTube links. https://youtu.be/mucCm2KTdiE, https://youtu.be/Fd0DTArfRjQ,  https://youtu.be/kW0_EGS6140.  I'll be posting videos from shows and home recording sessions regularly.  Cheers, GHS brothers and sisters!