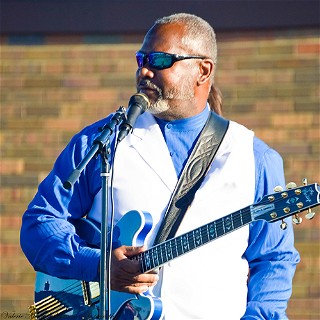 A lifelong resident of Ypsilanti is one of Michigan’s most talented and respected guitarists. Mr. Lawrence credits his musical talents first and foremost to God, then to the late Dr. Morris J. Lawrence Jr. (no relation). Dr. Lawrence was an instructor and chair of the Music Department at Washtenaw Community College (WCC). Under the tutelage of Dr. Lawrence, John was challenged and inspired to continuously improve his skills as a guitarist.

John Lawrence has published 16 instructional guitar books (three by Mel Bey Publishing), produced four DVDs and recorded 10 CDs. Mr. Lawrence was employed by WCC in Ann Arbor, MI for 36 years, retiring on May 4, 2015. He served as Chair of the Performing Arts Department, Head of the Music Performance Program, and was an instructor in the department. Within the first two years as department head, he developed 25 new courses and three Certificate Programs (Guitar Studies, Piano Studies, Music Production and Engineering). He also published a textbook for a course that he developed entitled “Self-Management for the Working Artist,” which educates students on how to make a living in the music business.

A hallmark of Mr. Lawrence’s tenure at WCC is his creation of the “Living Legends Series,” which provided a stage for famous recording artists to be interviewed and share their life stories in front of a live audience followed by a question-and-answer period. The evening culminated with a concert. The program provided WCC students firsthand knowledge from musical legends. The series hosted artists such as Mavis Staples, The Four Tops, Ashford and Simpson, Earl Klugh and The Temptations.

In the realm of performance, John served as musical director and lead guitarist for vocalist Carl Carlton, who was the opening act for such famed artists as Smokey Robinson, Chaka Khan, Lionel Richie and the Commodores, Rick James, Teena Marie, Frankie Beverly and Maze. He has made television appearances on three nationally syndicated programs: Kelly & Company, PM Magazine and Good Morning America.

On July 6, 2014 John embarked on a new challenge as the Musical Director at the newly formed Empowerment Church under the spiritual leadership of Rev. Dr. Carlyle Fielding Stewart, III. In its inaugural year the church has grown to over eight hundred members.

Mr. Lawrence is the recipient of numerous awards and recognitions. Most notable are the 2008 Washtenaw Community College Morris J. Lawrence Award, presented by the President of the College. It is the highest honor given to a faculty member. On May 28, 2015, he received a Special Tribute from the State of Michigan signed by Governor Rick Snyder, six state legislators, and presented by State Representative David Rutledge for John’s remarkable years of service at Washtenaw Community College and the greater community as a whole.

What happens when a seasoned guitarist dedicates fifteen to twenty hours a day for a year straight writing and recording a CD? The answer is, “Masterpiece”

Journey with John as he shares the creative process in the making of his new CD. In December 2018 John decided to cancel his engagements and devote all of his waking hours to recording an album that is his masterpiece. “I wanted this project to be the best thing that I ever recorded” says John, so from December through April John went into the recording studio to work on this massive undertaking which includes writing and recording the songs, producing and arranging them as well as editing and mixing. When he says “I am writing and recording songs”, he means he is playing all of the instruments: piano, guitar, bass guitar, drums, string orchestra, the horn section and all of the bells and whistles that go into producing and arranging a finished product. He is able to do this through the use of his guitar synthesizer which enables him to create sounds like any instrument.

John discovered some things about myself during this process. The first thing he discovered was that, after the first thirty days of this type of dedication and work, he had built up the endurance to stay awake and work almost all around the clock. He would only stop to eat and sleep and usually slept two or three hours at a time. Which was from 9:00 a.m. until 11:00 a.m. His focus and concentration was more than he ever imagined. The second discovery was that he did not need as much sleep or food as had needed in the past. During his third discovery he noticed that his songwriting skills had improved greatly. He was composing better songs and they were coming to him more frequently than ever before. For example he would sleep for a few hours and would be awakened by a melody on his mind and he would immediately begin working in the studio and within a few hours a new song was born. He was writing two and three songs a day. His ability to write melodies, chord progressions and rhythms improve to the point to where he no longer needed assessment to write music. He reached a new level of creativity. John states that “I have only met two people in my lifetime that could do that”. One being Dr. Morris J. Lawrence Jr. who founded the Performing Arts Department at Washtenaw Community College in Ann Arbor MI and the famed Motown arranger Paul Riser, who did the string arrangement for The Temptations classic “My Girl” he also arranged for Diana Ross and Marvin Gaye, Stevie Wonder and many more.

Songs were coming to him even when he was not planning to writing a song. For example, while talking with a fellow musician about his experience during the process of making the CD, a new song came to him. Another example occurred during a photo session for the cover of his new CD; as soon as he placed his hands on the guitar to strike a pose and a new song immediately came to him. After the photo session ended he went into the recording studio and recorded “Photo Shoot” and it is one of his favorite songs on the CD. This is just a few of the many examples of how his songwriting skills have greatly improved. “I feel like songs were in the air all around me and all I had to do was reach up and grab one”.

John’s initial goal was to record thirty songs and choose the best twelve or thirteen songs for the CD. John says “After three months I have surpassed the goal of thirty songs by recording sixty songs”. John’s journey began six months ago and he is approaching one hundred songs and counting.

John is still writing and producing songs every day and is now working at this level of intensity which has become a way of life for him. He now take time to enjoy the warm weather and the sunshine and he is still averaging up to five songs a week. Songs continue to flow and he realizes that I will never be finished with this project and that he is going to have to stop and choose the best songs in order to release his Masterpiece CD Collection: Volume I, II, III…. In August 2019, he released a single from the CD on video for the steppers entitled “Step Into The Night” which can be seen on YouTube. The first week it has received more views than his videos that have been out for five years or more. John plans to record a music video for every song on the CD.

When he began this musical journey he did not want to put any restrictions on the type of music that he was going to be composing and recording, He wanted to play music that he enjoyed playing therefore the music ranges from Jazz (both straight-ahead and smooth jazz) to R&B and Pop to Latin. The guitar stylings range from the sounds of Wes Montgomery to George Benson to Carlos Santana to his own unique voice. Some songs sound like they were written to be TV themes songs and some of them like movie scores. What ne is most proud of when it comes to the songs on this project is that all sound different from each other.

This musical journey has been most educational says John. “I learned some things about my guitar playing technique and my tone. After a month into this project, I realized that I did not like the sound of my guitar. That was a hard pill to swallow given the fact that I have been practicing the guitar for 54 years”. As a result he ended up changing the way he holds the guitar pick and changing his approach to the way he was striking the strings. He even played some songs without using a guitar pick. He used his thumb in order to give the guitar a more delicate tone and a more sensitive touch. John also discovered that it wasn’t enough to just play the right notes and play them with the right rhythm. He had the play them with the using the proper phrasing. In other words play the notes at the right volume for each part of the phrase within the song.

Something else he learned was, it is not enough to write songs that have a good melody and good chords. He discovered that when you listen to a song, it has to feel good as well as sound good. This was a revelation for John. “You would think that I would already know this because, I have literally play thousands of songs” says John. He was now moving into a musical realm that he had never achieved or experienced before. What used to be good enough for him is no longer good enough. It was time to raise his standards.

My goal is to record songs that will cross over into different genres and not just a in the jazz category says John. He has even written a song in tribute to James Brown entitled “Take It To The Bridge” an upbeat dance song. Some songs on this project were written for ballroom dancers and the steppers such as: “Stepping Four on the Floor”,” Step into a Dream” “Cool Jazz”.