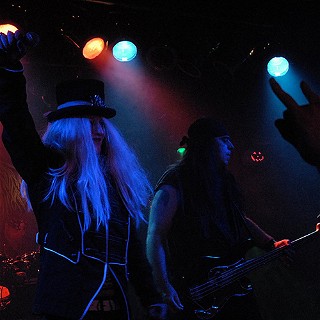 Halloween was formed in 1983 by members Rick Craig, Brian Thomas, George Neal and Bill Whyte. The band has been "A longtime staple of Detroit's music scene" as stated in The Detroit Almanac along with a list of favorites such as MC5, Iggy Pop, Alice Cooper, Ted Nugent, Eminem and Kid Rock. They are also a favorite beyond the pond in Europe. They are mentioned as part of the Detroit music culture at the Detroit History Museum. They have played with bands such as Megadeath, Queensryche and others. Their stage shows are spectacular; adorned in horror props, lights, fog, occasional fire (if permitted) and a front man in constantly changing costumes. Bringing old school metal to all ages and diverse audiences.

Their debut album Don't Metal with Evil was released in 1985 on the Motor City Metal label.

In 1986, Halloween started work on its follow up to Don't Metal With Evil, Victims of the Night. However, the record was shelved until it was finally released on Molton Metal Records in 1997.

In 1989, Halloween toured with Crimson Glory on their Transcendence tour. In that same year, Halloween began work on a new album with Jon Drenning of Crimson Glory and Warren Wyatt management. The album never made it to the shelves.

1990 Halloween recorded the demo in New Jersey for NO ONE GETS OUT that was produced by Jon and Chris Oliva from the band Savatage and TSO. Then officially recorded in Novi Michigan and released in 1991.

In 2006, the album Horror Fire and E.vil P.ieces were released on Pure Steel Records

In 2012, the album Terrortory was released on Pure Steel Records