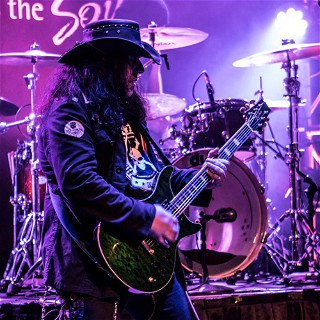 Growing up in a small town in upstate New York Frank Yanno found early on that he had a gift for Drawing and spent much of his youth pursuing Art as a Career. However, somewhere along the way he found Music.

Frank started taking Guitar Lessons at the age of 18 but it quickly became apparent he could learn the Songs faster than his Teacher. So after 6 Months he began developing his Playing on his own. As with most Musicians starting out, Frank learned Songs from Bands that were popular during the day like Journey, Foreigner, and Rush then later discovered Black Sabbath, Led Zeppelin, Ozzy Osbourne, and Judas Priest. This was the foundation for his ability as a Songwriter.

He formed and played with several Bands throughout this time (Triphammer, White Widow, etc.) and fell in love with Live Performance opening for such acts as Talas and Y&T. He became known for meticulously learning Guitar Solos Note for Note. At one point, he and his longtime friend and Guitarist John Gillette formed Luther Braque with members from previous Bands. They quickly became one of the “Bands to See” in the Rochester Music Scene and Opened for Acts like Ronnie Montrose, Keel, and Loudness and won a coveted spot on WCMF’s Homegrown 6 Album with the song “The Best in Me” written by Frank.

Setting their sights on Music as a Career, the Band decided to move to Los Angeles where they enjoyed success on the Sunset Strip in its Heyday but as things tend to go, their excesses got the better of them and the Band Broke Up and one by one they all moved away except for Frank who continued to rebuild with new Members. It was then that he became infatuated with Recording and Production. However, when Nirvana put the Proverbial Nail in the Coffin for 80’s Metal the Band went from Performing in front of Hundreds at the Roxy, Whisky, FM Station, and Gazzarri’s to 30 or less at Coffee Shops. The Band couldn’t take the strain and eventually broke up.

Frank took this time to sink himself into Writing and Recording and honed his Skills as an Engineer and Producer. He started investing in Recording Equipment, which lead to the creation of Gossamer Studios. When he felt he was ready Frank took the Songs he had written and formed a new Band called tHe CoNStAnT- releasing several Albums including NINETIMESTEN, The Letter, and Sometimes Things Just Happen all Written, Recorded, and Produced by Frank at Gossamer Studios. The Band enjoyed some success throughout the LA Scene performing at places like the House of Blues, The Key Club, The Roxy, The Whisky, and even travelled to Moscow, Russia to Perform in front of 20,000 as the only Band from the United States.

With the replacement of some Members, the Sound of the Band changed so they changed their name to something more fitting and Black Valentine was born. With Black Valentine, Frank has finally come into his own. He began to develop an Idea to create a more Direct Style of Songwriting with less “Look At Me” moments in favor of his wanting to see a Band on Stage Kicking Ass as a Unit!! In 2015 the Band Released World Gone Wrong, quickly followed by Slingshot Rebels in 2016 and is currently working on a double Album of Remakes.

Frank has also become more recognized in the Industry –receiving multiple Endorsements from such Companies as GHS Strings, Rocktron Electronics, Baker Guitars, and Zemaitis Guitars. Frank has Produced, Recorded several Artists’ Recordings at Gossamer Studios as well as Performed on Stage with Kenny Aronoff, Ellis Hall, Martin Guigui and more. He has Written Songs for Movies, Television, and Stage.

Frank Yanno has become a force to reckon with in today’s Music Scene.