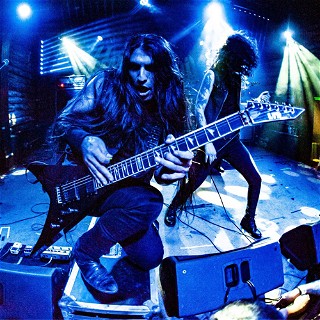 Eli Santana began his professional recording and touring career with the band Holy Grail as lead guitarist and key songwriter. Holy Grail has released 3 full-length albums and 2 EPs with Prosthetic Records and has toured the world playing festivals on such continents as Europe, Asia, Australia as well as the US.

Eli has also shared his guitar work and writing skills with Huntress on their last full-length release as well as fulfilling touring duties as a full time member.

Along with years of experience, Eli also has a BA in Music from Cal State Northridge where studied classical guitar, music theory, midi, recording arts, composition, business, singing and steel drums. Priding himself a composer, Santana has also scored the music of video games, short films and apps as well.

Recently, Eli has joined the ranks of Arizona Metal Outfit, Incite who just finished a European tour as the first of many tours in 2020.

And after years in the making, Eli’s solo project, Alien Satan will have its full-length debut in the summer of 2020.