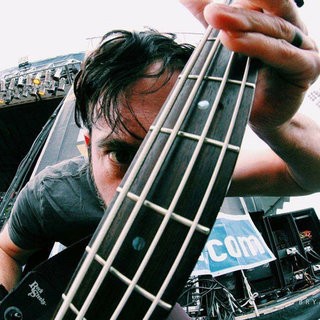 Winter can feel as ominous as it does endless. The seasonal equivalent of a horror flick, the blistering cold and unpredictable curtain of snow teeter between brutal and beautiful. Chevelle—brothers Pete Loeffler [Guitars, Vocals] and Sam Loeffler [drums] and Dean Bernardini [bass, vocals]—work well under these conditions. This atmosphere even inspired the title of the multiplatinum Chicago alternative rock band’s eighth full-length album, The North Corridor [Epic Records].

The North Corridor is sometimes how we describe the area we live in, Chicagoland,” Pete elaborates. “A lot of people joke about how the winters are so long and cold. It’s just where we live. It’s where we grew up. It’s where we cut our teeth. It’s where we started. The title seemed fitting. There’s a reason we write the way we do. We make heavy music. There are aspects of this area that can be all-encompassing, and you can’t deny them. I’m digging up some dark subjects within that. This is definitely more of a metal album.

It’s also the next natural step for the trio, continuing a journey that began in 1999 with their full-length debut Point No. 1. Since then, their 2002 platinum-certified Wonder What’s Next spawned hits including “The Red” and “Send The Pain Below,” and 2004’s gold-selling This Type of Thinking Could Do Us In yielded “Vitamin R (Leading Us Along).” Following the acclaimed Vena Sera in 2007 and 2009’s Sci-Fi Crimes, Hats Off to the Bull bowed at #9 on the Billboard Top 200 in 2011 bolstered by the smash “Face to the Floor.” Most recently, 2014’s La Gárgola earned the band’s highest debut on the Billboard Top 200 at #3, while garnering features from Billboard, Chicago Sun-Times, Rolling Stone, Revolver, Premier Guitar, DRUM! Magazine, and many more.

While writing what would become The North Corridor in late 2014, Pete became a father, and it profoundly impacted the course of the album.

“It’s one of the biggest moments,” he goes on. “We all have kids now. When you embark down the road of writing an album, it starts with songwriting. I’ve got to set time aside to focus. Luckily, I have a cool wife who lets me do that. It’s still difficult to balance since I want to spend as much time as possible with my son. It was such a different experience writing. I really had to budget my time and balance.”

Writing throughout 2015, the band headed to Los Angeles in February 2016 to record with longtime producer Joe Barresi [Queens of the Stone Age, Tool, Coheed and Cambria]. They began nodding to heavier influences like early Marilyn Manson, Danzig, Helmet, and Clutch. After a month in the studio, they emerged with ten blistering new tracks that rekindled the brash power of their early material while reflecting nearly two decades of refinement.

“It was a great process,” continues Sam. “Joe has so much knowledge from so many years of doing this. At the same time, he always pushes us to do what we want to do. He reinforces what we’re doing and gets the best out of us.”

“We went back to find some of those Wonder What’s Next tones, which were heavy as shit, and we tried to incorporate everything we’ve learned over the past 18 years,” he goes on. “It’s like going back to that era. We’ve always balance those melodic and heavier elements.”

The first single “Joyride (Omen)” swerves from a guttural guitar chug and harmonic swell into an infectious and invasive refrain driven by Pete’s piercing primal scream.

“It’s basically about when you run into somebody who’s chasing the past instead of living in right now,” explains Pete. “It’s a reminder to live in the moment and not dredge up too many things from the past. Don’t worry about tomorrow. Don’t toil over yesterday. Live in the moment. I wish I would’ve enjoyed the journey more. Having a kid, I see that. When he grows up, I’d love to teach him to not be in a hurry.”

The seesawing distorted swing of “Young Wicked” further examines that theme of growing up with a vocal catharsis, while “Rivers” updates the “parable of the frog and the scorpion” through a hushed verse and clean guitar culminating on an explosive chorus. “Door To Cannibals” knocks out one of Chevelle’s heaviest hooks to date, and “Enemies” targets keyboard warriors.

“I got home from Los Angeles, and some internet shit came up,” sighs Pete. “It made the song even angrier than I intended. The song is specifically aimed at battling the misquotes, lies, and made-up bullshit online. All of the feedback was literally done in my basement after this issue started. I couldn’t fix it, so it came out in the song.”

“Shot From A Cannon” stands out as the band’s most epic composition to date, crossing the eight-minute mark.

“It was a total experiment,” Pete smiles. “It felt like the perfect way to end the record. It’s creepy, and the message is, ‘Don’t trust anyone.’ It paints a picture of someone who didn’t know what he got into, shouldn’t have trusted, and made a bad decision.”

“We initially wanted a slow cool heavy vibe a la Soundgarden with big chunky guitars,” Sam goes on. “It turned into that!”

Ultimately, The North Corridor is Chevelle’s strongest body of work yet.

“This band envelopes every part of our lives,” Sam concludes. Everything we do is built around playing shows, writing, recording, or traveling. We’ve devoted all we can to it. It’s amazing to have a career this long."

"The three of us do everything on our own," Pete concludes. "We adopted this lifestyle almost 20 years ago to be songwriters and musicians. Nothing left us disenchanted or stopped us. We’re here, and we’re not going anywhere."