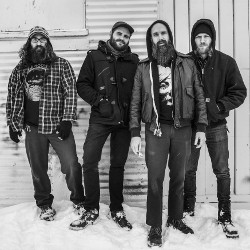 This record is only 19 minutes long but it is so dense with ideas and riffs and biting, late-era Black Flag guitar solos and clanking, chugging bass lines and splattering drum blasts and yowling vocals you will be gnawing on it like gristle for months to come.  The first damn song, “Still Fucked Up After All These Years”, charges through three distinct sections before exploding to a complete shut-down exactly one minute and one second later.  The title is a misnomer because Child Bite is impossibly somehow more fucked up now than they were in the past, which is no small feat. The first time I saw them there was a baker’s dozen of maniacs clad in homemade costumes running into each other (ok there was probably only two) and Shawn was using an old video-game joystick to make noise.

Every year seems to bring around a new Child Bite, which might be synth-driven punk or yelping, sax-soaked art-rock or thundering, ugly sludge. But each time feels like  the most “Child Bite” band possible, wringing every mode & expression out of the music, exhausting it (and usually a drummer or two in the process) before barreling on to the next adventure.

Strange Waste finds them in full-throated pigfuck mode, pulling from various extreme ends of metal, noise, and hardcore without falling squarely in any of those camps. Instead Child Bite churns up something altogether different and original. Really this is just heavy rock music, saved from any namby-pamby genre qualifiers, Child Bite don’t slide comfortably into your music library anyway and that is what makes them great. Shawn Knight’s voice, not a simple shout or mere cookie monster growl, it is flintier &  more distinctive. I’m still not sure what he’s proclaiming about during “Ancestral Ooze” but that doesn’t stop me from wanting to sing along.

Get your hands on this while you can, because who knows, by the time your brain is able to process these tunes Child Bite will likely be off on to a new form, still fucked up.