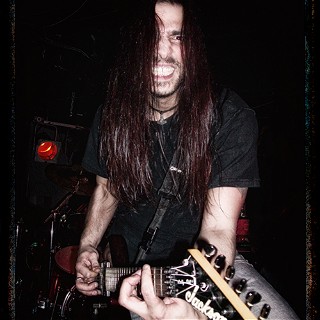 Carlos Alvarez is a guitarist who has been part of the Philadelphia metal scene for well over 20 years resulting in extensive live and some touring experience. Having 1st been inspired to pick up the guitar after hearing HELLOWEEN as a teenager, Carlos quickly absorbed influences from all styles of metal but also, thanks to his uncle, a keen appreciation for classical, ethnic music and all kinds of 70s music.

Currently playing live with Philly Traditional / Power Metal monsters POWER THEORY he also had an extended 5 year run in one of Philly's most beloved bands DISPOSABLE HEROES. What started as a tribute to vintage Metallica eventually encompassed bands and songs covering the entire golden age of metal in their marathon, multi hour sets. He's also spearheaded his own studio project SHADOWDANCE, primarily a song writing vehicle giving complete freedom to collaborate with musicians from all over the world with the last album "Future Negative Fantasy" having been released by Rock It Up Records, Germany.

Carlos is currently hard at work co writing and in pre production for the new POWER THEORY album, wrapping up production and preparing to mix the upcoming JUDICATOR and DIRE PERIL albums and co producing + additonal engineering on the upcoming HELION PRIME album.

"As long as I can play what I'm hearing in my head or kinda close to it, I'm happy"