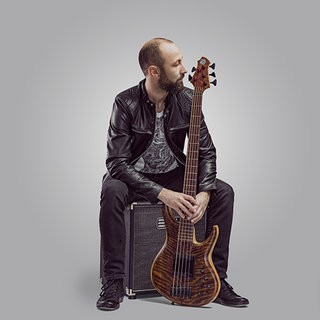 Nicosia born bass player, composer and arranger Cahit Kutrafalı is one of the first call session players in Cyprus. He received his bachelor’s degree in music in 2007, since then he has been performing as a band leader and working with numerous musicians and bands as a sideman from all over the island, Europe and Turkey. He is best known for his versatility and unique style of soloing on electric bass where he combines bebop elements with a modern approach. Beside performing, he is also one of the faculty members of the "Cyprus Jazz Workshops" which organized by Jazz Education Abroad program. He has performed and recorded with respected names such as Chris Byars, Gilad Atzmon, Ari Roland, Keith Balla, John Mosca, Charis Ioannou, Marios Toumbas, Genco Arı, Marios Takoushis, Stelios Xydias, Cenk Erdogan, Damian Erskine, Tolga Erzurumlu, Sarp Maden, Elif Çağlar, Vahagn Hayrapetyan, Ioannis Vafeas and Zaid Nasser. He released his debut album "As It Is" in October 2015. Beside all he is also a member of the Nicosia Municipal Orchestra as an arranger and a bass player.