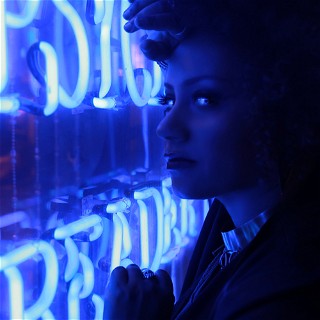 I recently had the opportunity to interview powerhouse vocalist, Militia Vox, who currently fronts her own solo project as well as the impressive all-female tribute band, Judas Priestess. Her new album, “The Villainess” which she released last year, echoes 90’s industrial and trip-hop stalwarts such as Sneaker Pimps, Kidney Thieves and Massive Attack. Equal parts edgy and sultry, “The Villainess” is a showcase of lush soundscapes, Vox’s soaring vocals and cutting lyrics.

You just released your new solo album, which is quite a departure from Judas Priestess in that is very reminiscent of groups like Nine Inch Nails and Portishead (which I love). What inspired this particular record? I’ve always made original music, since 1998. My first bands were industrial rock bands, so I guess I’m returning to and claiming my roots. I like it all as long as it’s moody, dark and/or heavy.

Will you be touring “The Villainess”? I sure hope so, because it reminds me of “Queen of the Damned” or “The Crow” soundtracks, which are both so brooding, cinematic and deliciously dark! Thank you! I knew you’d understand the influences ;) I’m not touring the album per se. I just allow for the opportunities to perform as they come. I had an album release party in Brooklyn that was a blast- I produced a full night that showcased my band (Militia Vox) alongside some of my favorite local bands, all female fronted- Tamar Kali, The 1865, The Sedona Effect with DJ CX Kidtronik. It was killer.

So what is this I hear about you being featured in a new movie about Betty Davis? Can you weigh in for us? I’m honored to be in the new Betty Davis documentary, “They Say I’m Different.” It’s been kicking ass on the international film festival circuit. This year it should be streaming at some point. It tells her story in detail and finally lets the world know why she disappeared from the music industry.

Women, particularly women of color, are often misunderstood in the music industry, and in the entertainment industry as a whole. I think it’s important to tell stories like these to shine a light on how diverse and unique our stories are.

Will you be doing another covers album in the future? I really enjoyed the “Bait” album you did some years ago. Love your takes on “46 & 2,” “No More Tears” and “Reptile”. I made the “Bait” album to get people’s palettes ready for my new sound, by highlighting and reinterpreting my influences - Ozzy, Tool, NIN, Tina Turner, PJ Harvey and Depeche Mode. Kind of an odd grab bag, but if you know me, it makes sense. I’m not opposed to making some more covers- maybe Deftones, Patti Smith, King Crimson, Metallica, L7, The Cure...

Based on your musical tastes and directorial efforts, I’m guessing you’re a horror fan (haha)? What are some of your favorite horror films? Oh yeah! I’m a horror junkie. I go see everything- even the bad ones! Favorite horror movies include: The Exorcist, Nightmare on Elm Street 3, 4 and 1 (in that order), Hereditary, Get Out, The Conjuring... A24 and Blumhouse are my favorite current film production houses.

And a little known fact about me, I hit as many haunts as possible nationwide every fall-best ones are Knott’s Scary Farm (CA), Universal Studios Horror Nights (CA) and Headless Horseman (NY) 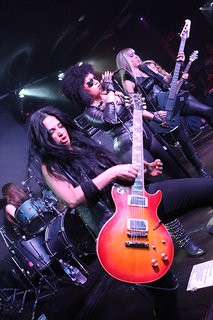 Aside from pursuing your solo career and Judas Priestess, you have quite a bit of theater experience. Tell us about some of that. I’m sure it helps that you live in New York! The whole reason I initially came to NYC was for theater, the nightlife and action of the city. I’ve been lucky to do some exciting work Off Broadway and in European Tours of rock musicals; Jesus Christ Superstar being my longest run. I was in that show for almost a year, 8 shows a week! That’s how I built up my vocal stamina. I still do theater now- I’ve done several productions of The Rocky Horror Show over the last few years as both Columbia and Magenta, but I really want to be Frank!

You are an endorsee of Manic Panic hair color. That makes total sense! What are some of your favorite shades to use? It’s so cool to be a Manic Panic model! So surreal. If you had told me at 14 when I was first dyeing my hair purple with Manic Panic in my parents bathtub that I’d be their catalog cover girl, and on their posters and banners it would have blown my mind!

How does it feel to be a calendar girl (we used Militia in our 2019 GHS calendar)? I love it. Such an honor- thank you. Also, it’s the first time I was not Miss October! Cool to be April showers...

Which GHS strings do you and/or Judas Priestess use on the road? I’ve used GHS strings since 2001; 10’s for guitars and Boomers for Bass. Both bands love and are so incredibly proud to use GHS strings. Thank you for including us in the GHS family!