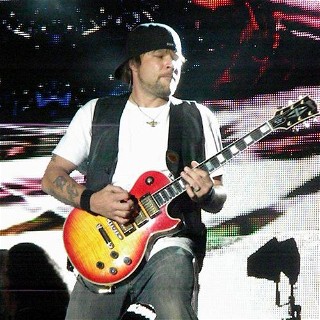 I was honored to interview GHS artist, Jason Krause, guitarist for one of my favorite artists, Kid Rock. Krause has been playing with Kid for over 2 decades, helping to craft some of his biggest hits, including “Bawitdabaw." In addition, Krause is also a multi-instrumentalist, and a masterful carpenter. Read more about Krause’s history with Kid, and how his tenure with the Detroit rocker has helped to broaden his musical scope, and allowed him to share stages with some of music’s biggest stars.

You've played in a few metal bands in the 80’s, and were initially the Twisted Brown Trucker Band’s resident "metal head." How has that changed or evolved over the years, given that Kid Rock has gravitated a bit more toward country music over the years? I did play in death metal band called AFTERMASS. It was with my brother, Scott Krause (drummer). That was my passion: headbanging, lol. When I joined the Twisted Brown Trucker Band, I had to become everything from a metal player to blues and country which was a big change, but exciting at the same time. I then became that guy in the band who had to play all the acoustic guitar. Again, what a huge change from what I did.

How did you land the initial audition with Kid Rock, which happened to be his famed Atlantic Records showcase at the State Theater in Detroit? Well, me, Kid and Kracker are all from the neighborhood; we were boys prior to me joining the band. Funny story: Kracker had approached me per Kid’s instructions to ask if I was interested in joining the band; I said no the first time. I said that his style was not my bag, so Kracker told Kid that, and Kid then sent Kracker back to ask me one more time if I could just fill in for a very important show he had coming up. I said, “okay, I can help you out with that," and the rest is history. I decided to hang for the next 20 years, lol!

You’re a huge fan of Les Pauls and Firebirds. Which guitar(s) do you find you break out for heavier tunes, and which ones are your go-to’s for some of the more country flavored songs? I do love all Gibson guitars, but my go-to metal hard rock tone would be my GMP American flag Flying-V. I have EMG 85 pickups in it so I can get that little extra crunch needed! And for the more rock, country, Americana tunes, I’ll use my 68’ reissue Gibson SG. She’s my favorite all around guitar. I can do just about anything with that one.

During your tenure with Kid Rock, you’ve become a bit of a multi instrumentalist as well, introducing drums and piano into your repertoire. Was that influenced a bit by Kid, who switches up instruments throughout every show, or did you just want to do it for your own personal enrichment? As far a learning other instruments, I’ve always loved playing drums, percussion, etc.. I think as a musician everyone is a little bit intrigued by the other dynamics of the band; I would like to think you could play them all, or at least try. I have a small studio in my house and playing a little bit of all instruments is helpful when doing demos for our records and/or anyone else who may be interested in a song for their record.

You’ve had the opportunity to travel all over the world playing with Kid, sharing the stage with many iconic artists. Were there any particular artists you were positively star struck by? Of course there’s been a lot of artists we’ve played with that I have not only been star struck by, but have nothing but the most respect for. So to name drop a few (lol): Metallica, Aerosmith, ZZ Top, John Fogerty, Ted Nugent, Run DMC, Sheryl Crow, Bob Seger, The Rolling Stones.. the list goes on and on. I have been blessed with the opportunities and the people I have met and performed with through out my years with Kid. 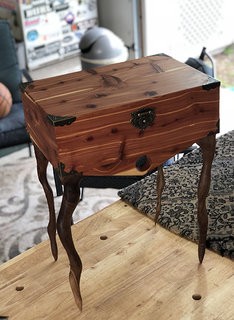 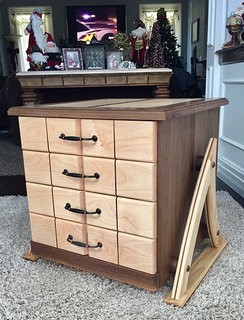 Do you ever do some writing for yourself as well? If so, we’d love to hear it! I do a lot of writing on my own and have several songs on different records with Kid Rock, including Bawitdabaw, Rebel Soul, Fuck Off, Sugar, Rock n Roll, Somebody’s Gotta Feel This, Drunk in the Morning, American Badass, etc... I may some day release a record of my own, only because I have a hard drive full of songs no one has ever heard. It would be a shame to just let its sit there and never be shared.

In addition to being a musician, you’re also a carpenter. Do you ever find yourself doing little projects around the house when you’re off tour? I was a carpenter years ago building homes. I have a wood shop now that I absolutely love making things for family and friends in. In fact, I made an end table for Stephanie last year for Christmas that came out awesome! I use my wood shop as my way of getting away from thehustle and bustle of the world and it’s a great way to waste the tons of time we have off when not touring and recording!

Which GHS Strings do you tend to favor for electric and acoustic when you’re on tour, and which ones seem to be the most durable? My favorite GHS Strings have always been BOOMERS. I have been using those strings for 30+ years and will use them til I die or y’all stop making them. So, I’m gonna need you to keep making them or send me the rest of my life’s supply please, hahaha!

For my acoustics, I use Phosphor Bronze light and medium gauges, but I also like to try different GHS types when they come out cause ya just never know.

I know this may be a ridiculous question, but since you co-wrote one of Kid Rock’s biggest hits, I just have to ask.. what is a “Bawitdabaw”? Okay, yes this seems to be the question that people always want to know, lol. What does Bawitdabaw mean?! Are ya ready? This is mind blowing, and I don’t want anyone to get hurt, so please use this information carefully, lol.

It's an old school rap chant used throughout the years by many artists in many different ways. Unfortunately, we were sued for using it, and paid a lot of money back to parties who "thought" they deserved the hard earned money I made, but that’s a whole other story I’d like to forget, hahaha!

One last note: I would love to thank everyone at GHS, especially Paula McQuern, who has been with the Kid Rock camp for many, many, many years. Thank you guys from the bottom of my heart. I love all of you and your products!