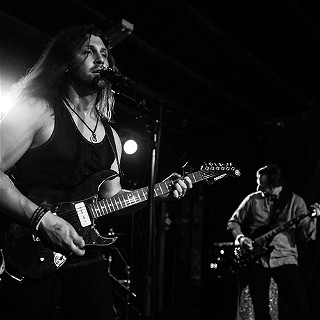 I recently had the chance to “nerd out” with “mythic rock” band, Shadow Horse, whose passion for storytelling is as deep as their love for all things fantasy and sci fi. Read more about the Nashville based trio here.

Your music can best be described as “mythic rock”. What do you all normally tend to write about? Do you gravitate more toward fantastical themes, or do you write ambiguously enough for the songs to apply to everyday situations? We are definitely in the second category. Music should be relatable yet somehow larger than life. On the last record we wanted to paint on a very large canvas but leave space for someone to insert themselves into the story.

You guys are currently based in Nashville. Do you ever find it hard to compete out there being that its mostly know for its country music? Absolutely. We love being here but we knew going into this group that in Nashville we would be a hard sell. Although a competitive city, the rock and alternative scene in Nashville has some of the BEST people around. The great thing about the rock scene is that we all support each other.

What is a “shadow horse”? It's the center of the story. The band is the horse and the story is the rider. We deliver the story.

Being that you’re a mythic rock band, did you guys find yourself reading a lot of Tolkien growing up, or playing a lot of D&D / Magic the Gathering? Can't get enough of it. We're still reading those books. Tolkien, Arthur C. Clark, Gene Roddenberry, Stephen Donaldson, etc. Once a nerd always a nerd. Read more books kids!

What’s next for you guys? Are you in the studio, or will you be doing some dates in or out of town? We're in the studio and writing, with some dates sprinkled here and there. The next round of music is a whole new ball game and it's really exciting to be where we are musically. We've gotten to know each other musically really well and it's showing in the writing. 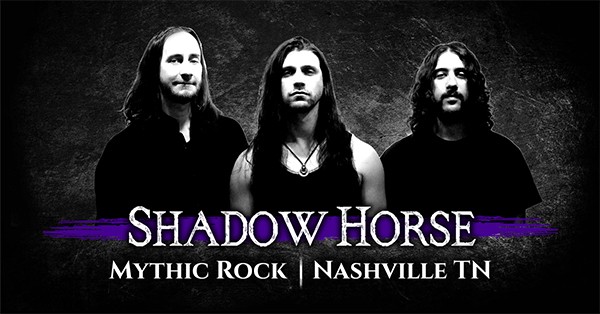 Who does your styling? Loved the Game of Thrones-esque garb you wore for the photo on the home page of your official site. Debie Rindhage. She is actually the mother of Bobby Rindhage, who directed our videos. She did the costuming for the first video and we were so impressed we commissioned some custom outfits. She did an incredible job.

Lane, are you still doing the solo thing as well? It reminds me a bit of Days of the New. Yes I write all the time. Not all of the songs end up Shadow Horse pieces. But you may hear revisited versions of a past song or two. I love Days of the New; definitely an early influence. There's just something wonderful about that percussive acoustic sound.

Who do you guys see yourself touring with? Because it has elements of metal, rock and even grunge, I could see you easily seeing you playing with anyone from Alter Bridge to Twelve Foot Ninja. Twelve Foot are a stellar band! Invincible is a masterpiece. They're busier than cats burying S*** on concrete! Some other favorites would be Rival Sons, Mastodon or even Ghost.

Which GHS strings are all of you guys using now? I (Lane) am still using the Boomers, in Thin-Thick (10-52) gauges. I just love the thinker bottom E. I play in Drop D and it still has good tension. My acoustic gets strung with a medium set of Signature Bronze. My Washburn is a bright guitar already so these keep it toned down a bit. Pete is using Bass Boomers, in medium (45-105) gauge.