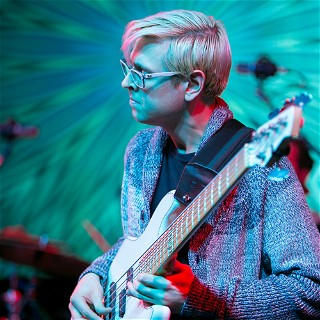 I recently caught up with the talented multi-instrumentalist, Evan Marien. While he sticks primarily to bass these days, Marien keeps a busy schedule with music production, teaching, and live gigs. Be sure to look out for his 3rd solo release with EMAR this year, as well as some new music with guitarist, Wayne Krantz, and EDM/pop vocalist, Sirintip. Learn more about this low end master here!

You play a custom set (35-58-70-90-121 specifically) of GHS Super Steels. Why this particular gauging? I really like the sound of the Super Steels, they have a clarity to them that I can't get from other string types. I play with a really light touch so I've found that I'm able to control my sound, specifically when I use hammer ons and pull offs, to a greater extent by using a lighter gauge.

You grew up playing a plethora of instruments, like trombone, keys, and guitar. Now, bass seems to be your instrument of choice. What about bass specifically turns you on? My favorite bands growing up had bass players that seemed out of the ordinary, like Geddy Lee from Rush, Flea from Red Hot Chili Peppers, and Jaco Pastorius from Weather Report. I felt that they had their signature sound over everything that they did, and I liked that the bass could play such a unique role in a band's sound and style.

You have had a ton of music placements with brands such as AT&T, The Dallas Cowboys, IMAX, HBO, The Early Show and Entertainment Tonight. Do you generally do sound designing/custom tailoring, or are they licensing what you’ve previously written? For those placements I've got to give full credit to Joel Beckerman and the incredible producers over at Man Made Music. With their guidance I've been able to create some really powerful pieces of music for all sorts of brands and networks. They're really great about letting me write while I'm out on tour, so most of the time I'm writing for them from the back of a van or the middle seat of an airplane.

The ad world is a completely different beast compared to the original music world. Does the artist in you ever get frustrated when a client wants rewrites or totally changes direction with a campaign? How do you deal with that? The rewrite or revision process wasn't what I was used to at first, and at times got a little frustrating but eventually I got used to it and now look forward to the feedback on a project. I've learned that when it comes to a big project for a big company I need the feedback to gain a clearer vision on what should come next. I work with an incredible team at Man Made Music and they keep things very creative. The collaborative process with them is always strategic and imaginative. When rewrites come up or changes in direction happen, we all go for the challenge. I've realized that sometimes the best music comes out of collaboration and an experimentation of ideas and thoughts, so I just go for it. 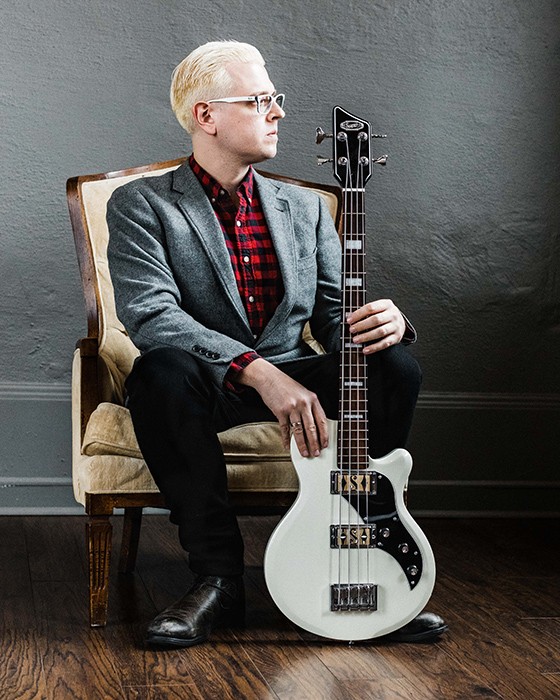 You have so many incredible projects going on at once. You have your solo project, EMAR, Evan x Dana (with fellow Berklee alum, Dana Hawkins), and you play bass for Elliot Moss and Thundercat drummer Justin Brown's NYEUSI. Do you ever have any chill time? What do you do on your days off? I keep a fairly busy schedule of teaching via Skype or privately when I'm back home in Brooklyn, but I do love to play video games. I'm a PS4 guy and I play all sorts of multiplayer games on there, but I have an old school game system emulator on my computer too, so sometimes I'll turn on one of the old Mega Man games or a Final Fantasy and start a play through for a couple hours to turn off my brain.

Your wife is also a musician. Do you ever collaborate, or do you try to keep things separate for the most part? Although we're both musicians, we're in very different areas of our professions so we don't get to make a lot of music together. Danielle runs her own company that books strings/bands/DJs for events and weddings called Divina Artisti. She's been doing that for almost 10 years now and has kept very busy with it. But we've been able to collaborate through friends on a couple projects together and she recorded violin on my tune 'Space Jams' (from the album Artifacts). She's a great singer as well, so it'd be cool to eventually record a project featuring her voice, violin and my bass.

What was it like playing bass in the late Allan Holdsworth’s band? I imagine with your background that you grew up listening to all of his stuff. I had a friend during my Berklee days show me the live album “All Night Wrong” and from then on I became deeply obsessed with Allan’s music. I was blown away by his playing on albums like “Metal Fatigue” and “Atavachron” but as I dove deeper into his discography I fell more and more in love with his compositional techniques and synth sounds. Virgil Donati, whom I first met when I recorded on his album “In This Life”, recommended me to Allan. Virgil had been playing with Allan for a number of years and when Allan was forming his new band, Virgil recommended me. I'll never forget that day that Virgil texted me 'Dude you're in on the Holdsworth gigs!' Dream come true!! I stayed in Los Angeles for 3 weeks to do rehearsals and play the gigs. Those gigs were so much fun, and Allan and I got to really know each other during them. I especially loved his sense of humor, he had a lot of terms I had never heard before so I began to write them all down… like instead of “soloing” he would say “waffling”, and he would call our guitar and bass solo moments “Guitar cheese” and “Bass cheese”, which would be written in the setlist like that. During a rehearsal, he played us this “new” chord, and when he played it his eyes lit up. Steve and I were eager to learn it and asked 'What's the chord Allan?' and with a cheerful smile Allan looked at us and said “All of them!”

You mentioned that you’ve been playing a lot with guitarist, Wayne Krantz. What kind of music is coming out of that equation? Wayne has sections that he will cue but most of the music is improvisational. I'd say about 90%. It's hard to describe what's going on during the improv, but at the heart of it is groove and funk. He also has tempo cues he likes to throw out, like 'up' or 'down' which means to the drummer to jump tempo at the end of a phrase. Lately we've been throwing in a cover of Back in Black in the set, which I never thought I'd be playing Back in Black with Wayne Krantz, haha. But Wayne kills it! Wayne's one of my favorites of all time. There's nobody that plays like him, he's created a unique identity. When you hear Wayne, you know it's Wayne.

You’re also working on a pop/EDM project with vocalist, Sirintip and producing a 3rd EMAR record. When can we expect to hear all of that? I'm hoping to finish it all in 2019 but I'm not going to rush it. I've got loads of special guests on the 3rd EMAR album like Cory Wong from Vulfpeck, Steve Hunt who was my fellow bandmate with Allan Holdsworth, Ian Chang from Son Lux’s band, Nate Wood from Kneebody/Four, Louis Cole from Knower, Tim Miller, and of course Dana Hawkins. More special guests being confirmed, I’m really pumped for this one!