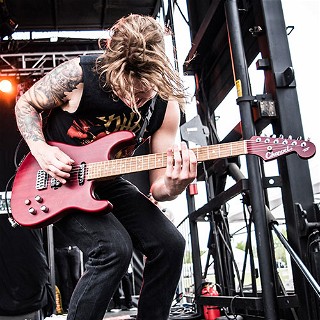 I recently had a chance to chat with GHS Artist, Justin Aufdemkampe of Ohio-based metalcore band, Miss May I. The soft spoken and eloquent Aufdemkampe, whose signature Charvel guitar was released last summer, discusses how MMI got their big break while still in their teens, his outside production endeavors, and how to save a few bucks when you’re on the road.

So it’s amazing that you guys are actually a veteran band considering you’re all still so young. You guys were signed to Rise Records in 2008 while still in high school. How did that deal originally come about? Were you grinding it out in a lot of all ages clubs? How did you attract label attention? Most of the attention we were getting at the time was local but we were traveling a lot out of state and playing bigger shows. We were super fortunate to have some friends in the industry pitch our name out to Rise as well as a few managers and booking agents. We had some decent demos and they liked what they heard! We went in with Joey Sturgis for our first record in '09 and I think after that a lot of people in the industry started paying more attention to us. Overall we just never stopped creating new music and played every show that we could.

So last time we talked, we shared our love of classical and even dime store music. Who would you say are some of your favorite composers? Do you have a particular favorite era or region where some of your favorite classical music comes from? That’s a very hard question but if I had to say my top 3 favorite composers it would be Mozart, Mendelssohn, and Tchaikovsky. Personally I think the romantic era of composing is probably my favorite in a whole. A lot of new ideas were floating around at that time and a lot of composers were stepping outside of the "Old world" box. Pushing limits if you will. Really when you dissect a song you can find traces in so many styles, types and genres that take from classical music. It’s the building block to everything we know as music today!

You guys have cited Deftones, Metallica, and Trivium (to name a few) as some of your biggest musical influences. Who would you say is your personal guitar hero? I saw that you’re a huge SRV fan, who was actually a GHS artist as well (fun fact). SRV will always have a soft spot with me! A lot of the music I grew up listening to was heavily guitar influenced through blues and hard rock bands, even some country. It’s hard for me to point out just one guitarist that changed it all for me. I think guys like Kirk Hammett, Randy Rhoads and even Vivian Campbell changed the way I looked at guitar and made me want to play the styles of music they were associated with. Being in a metal band I would have to say those three started all that up for me. Besides the heavy metal guitarists, guys like Brad Paisley and even David Gilmore I always thought had amazing styles and looked up to on a lighter note.

You just unveiled your new signature guitar with Charvel earlier this year. It has the classic Charvel San Dimas body, but can you tell us about some its other mods/features? Extremely proud and excited about my signature series releasing to the masses! We kept the body style pretty straightforward but added a few flings, one being a rotary pickup selector knob. It’s a three way pickup selector with the first position being the neck, second position both neck and FIRST single coil of the humbucker in the bridge and third the bridge humbucker pickup. With this, you don't have to worry about accidentally flipping the pickup toggle to another pickup position. Another feature I always thought was a lot of fun is the "Killswitch." It’s a video game style button that’s very easy and accessible to activate! You can use it rhythmically to whatever you’re playing or use it every now and then for parts that need some "Ear Candy." 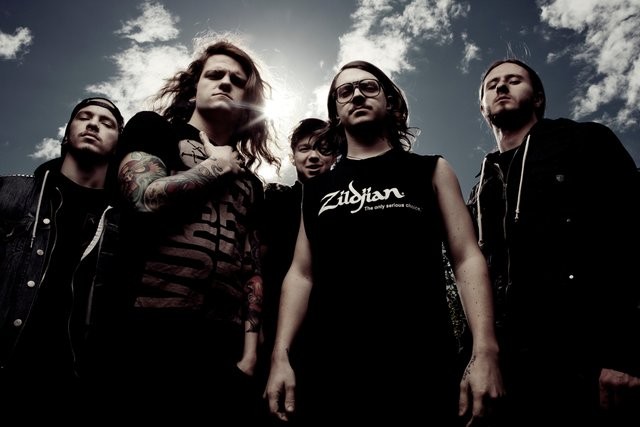 Which GHS strings do you normally play on the road, and which have you found to be the most durable for heavy touring? On tour we use two tunings. Mostly we are in Drop C (CGCFAD) or Drop A# (A#FA#D#GC). For the Drop C Guitars I use .12 to .52 GHS Boomers! For the Drop A# guitars I use .13 to .56 GHS Boomers. Heavy enough for staying in tune but also light enough to bend! As far as durability goes, I've tried many GHS strings over the years and ALL of them that I've tried have never failed me in the durability department.

In addition to playing with MMI, you’re also a producer/engineer. Do primarily record with metalcore bands, or would you say it’s a mixed bag? Anything we can hear? I would say it’s more of a mixed bag. I’ve worked with artists all over the music spectrum, but some of the more notable bands I have had the pleasure of working with are in the Metal/Hard Rock scene. I try not to only limit myself though to one type of genre because you never know what doors will open with certain artists! Terry Date (Pantera, Deftones, Limp Bizkit) told me this back in 2014 while I was recording MMI's "Rise Of The Lion" and it stuck with me ever since. I helped assist on Clutches "Earthrocker" album when Machine was recording them back in 2013 and recently I did some vocal engineering on War Of Ages "Alpha" record!

What’s next for you guys? Are you guys writing toward a new record or gearing up to go back out on the road? We've been in the talks about potentially writing a new record sometime here soon but nothing definite. In January, we will be heading out with August Burns Red, Fit For A King, and Crystal Lake on "The Dangerous Tour." Super excited to be heading out with a great group of people! The shows will be insane!

This is more of a question for indie bands that are touring or trying to tour. Which merch items have you found to be your biggest sellers? As far as selling your actual music, which medium would you say your fans buy more of—physical CDs, vinyl, download cards, etc? When it comes to merch, I think the biggest sellers for us realistically are the tour date merchandise. I’ve noticed in the Metal / Hard Rock world a lot of fans love to have the tour dates of the tour they went to on the back of whatever they are buying. I think it’s like a badge of honor mostly. They can say, "I was apart of this show on this date". I know personally I have a ton of tour date merch of my favorite bands I've seen live. When it comes to the music, I would say MMI sells more physical CD's than vinyl or download cards. Overall though, I think every medium of distributing music is important in its own way. It’s a way for people to spread the word about your band, which inevitably will help you!

Obviously touring can be a huge expense. Do you have any money saving tips you’ve learned over the years for when you’re out on the road? Mostly, I would say try to factor in your tour budget a weekly/daily per diem of some sorts for the touring party. This will allow you to be able to have padding when buying food, Ubers and little odds and ends items. Taking truck stop showers instead of getting hotels is another great way to save money. Also signing up for a gym membership at a Planet Fitness or another national gym chain helps. You can take showers at these places and workout as well for a small monthly fee.