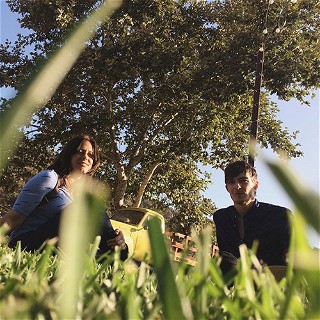 I spoke to incredibly talented GHS Artist, Monica da Silva, who fronts her own solo project in addition to “indie nova” duo, Complicated Animals. The LA-based songstress is making waves with her original music, which has been featured in the Golden Globe award-winning motion picture, “Lady Bird”, as well as touring the country with her unique sound, which is deeply rooted in her Brazilian heritage.

You are constantly licensing your music, which is one of the few money-making avenues left for indie musicians these days. How do you go about getting all these placements? Are you affiliated with any licensing agencies, or are you sending your material directly to music supervisors? I have sent my songs around to music supervisors and agencies, but roughly half the placements I've gotten, have come about from people reaching out to me directly. One of the agents happened to be looking for a Brazilian song for a series on the BBC in the UK. He sent them my newest song 'Soldado de Amor', and it happened to be a good fit. That same song was also featured in the Paramount Network series 'American Woman'. As for 'Back To His Girl', that was used in Lady Bird, that was such a great surprise. I co-wrote that song some years ago with a guy named Derrick Procell, while I was living in Chicago. He'd given the track to an agent he was working with. I think my jaw dropped, when he called to tell me that the song would be featured in the movie. When the World Cup was in Brazil in 2014, the music supervisor from ESPN found my music online, and reached out. I was really honored and excited to be included in the music for that, alongside very well-known artists like Sergio Mendes, Black Eyed Peas, Jennifer Lopez, Astrid Gilberto, Bebel Gilberto, and Coldplay. I think the most important thing an artist can do, is to send their music around, at least that way you're in the running for any opportunities.

You’re incredibly prolific in terms of your songwriting, and you’re always on the road. How do you manage to do all of these things at once? Do you ever feel like you could use an assistant? When we're touring, our days are filled with so many new sights, smells, and sounds. I feel like all my senses are heightened. I'm always coming up with new melodies and lyrics, and when we have downtime between gigs, even just a few hours, Chad will grab his guitar, and we'll try to hash those ideas out. Having an assistant would be amazing. When you're an indie artist, you have to wear so many hats- the booking agent, the manager, the songwriter, the performer. It's pretty hard to wear them all well. I've been playing music full time for about 10 years now. I would love to concentrate more on my art, and less on the business side of things.

In terms of gigging, you guys have played at a LOT of wineries. I’m sure you’ve sampled a ton of great wines. Which ones have been some of your favorites? We sure have played a LOT of wineries, and especially here in California, there's been no shortage of amazing wines. Chad and I have always loved and appreciated wine, and the art of winemaking. Our knowledge and appreciation has only grown since arriving here. There are so many small, boutique wineries that are producing some outstanding wines. These aren't mass produced, so if we hadn't moved here, I wouldn't have known about them. Some of our favorite wineries (so far) are Rideau Vineyard in Solvang, Merryvale Vineyards in Saint Helena, Lynmar Estate in Sebastopol, Presqu'ile Winery in Santa Maria, Riverbench in Santa Maria, Duckhorn in Napa Valley, Schramsberg and Davies Vineyards in Calistoga and Saint Helena. Honestly, those are just the tip of the iceberg. Our list is ever growing, and always evolving.

Do you find it difficult to manage both your solo project and Complicated Animals? I know it can be hard to switch gears sometimes once you get into the mode with one project or another. It's definitely difficult to manage both my solo project and Complicated Animals. I've been working on trying to split my time between the two projects. When we write, we try to think about what project the song fits. That kind of helps to steer the production. In regards to booking, it's actually helps to have both projects. When we perform at performing arts centers, and more international type shows, we usually perform under my name. People can make sense of how Monica da Silva plays Brazilian music. I think the name we use really influences the demographic of audience we draw.

Which GHS strings do you guys normally use on the road or in the studio? Do you find certain sets work better for live or studio settings? Chad usually uses GHS Phosphor Bronze strings. They have a really nice, rich tone. He also just started experimenting with the Silk and Steel strings. Chad was touring with his Taylor NS72ce classical guitar, for a long time, but is now playing a mahogany Taylor GS Mini. He's loving the Silk and Steel strings, because they bridge the gap between the classical and steel string sounds, and they're great for fingerstyle playing. The Phosphor Bronze strings work well live, and especially for jangly, strummed, acoustic parts in the studio. 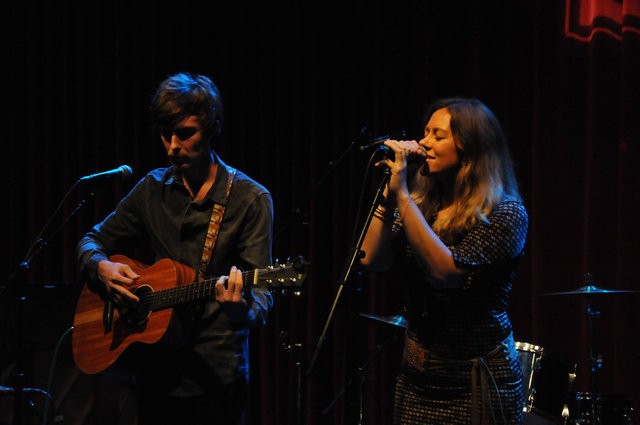 Your Brazilian roots are very apparent in your band with Chad Alger, Complicated Animals, which you’ve called “indie nova” (a mixture of both indie and Brazilian bossa nova). How did indie nova come to be, and how did you and Chad meet? Indie Nova was born out of a need to explain our style of music- a style that doesn't perfectly fit under the labels of Bossa Nova or Indie. My mom is Brazilian and Portuguese, and my dad is American - of Irish and Dutch descent. I've had a lot of exposure to music from all the world. Chad also came from a diverse musical background. He was raised on a lot of Blues, Rock, and Jazz. We met while living in Chicago. Chad's first instrument is the drums, and we first played together in a 4 piece band. We started writing a lot of songs, while trying to avoid the blizzardy conditions in the Windy City, during the winter of 2008. Most of the songs on my first album 'Brasilissima' were written at my kitchen table, on the north side of Chicago.

Because you have dual Brazilian / American citizenship, do you ever tour over in Brazil as well? I haven't yet toured Brazil, but that is in my near future plans, for sure. Brazil has always been my second home, and although I've visited many cities there, I'm eager to explore the whole country in depth. My mom is from the Amazon area of Brazil- a city called Belém, in the state of Pará. I spent 3 months out of every year there, while growing up. What a complete contrast that was to my life in the Midwest. I've been captivated with Brazilian music, and its culture, ever since I can remember. It'll be so amazing to tour there.

What are some of your favorite Brazilian dishes? Any places you frequent out here in LA? I know of Bossa Nova in Hollywood, which has fantastic food, but where else can I get some great BBQ meat? Okay, my mouth is watering now. There are so many amazing Brazilian dishes. A lot of my favorites, are actually native to the Amazon area, and aren't really known outside that region. I'm obsessed with the indigenous food. If you'd like to learn more about what that's like, I recommend watching Anthony Bourdain: No Reservations - Season 7, Episode 6. It's filmed in the city my mom's from, and perfectly captures what the Amazonian cuisine is all about. I also love dishes like the Brazilian national dish Feijoada- a black bean stew of Portuguese origin. I make that sometimes, and it reminds me of being in Brazil. Bossa Nova, in Hollywood, is really good. I need to sample more Brazilian restaurants here in Los Angeles. I love to cook, so I usually make Brazilian food at home.

It looks like you will be doing some extensive touring next year and also releasing a couple albums. That’s pretty extraordinary! Most bands have difficulty completing just one record in a year’s time, and here you are doing that AND playing live. What can we expect musically from you and/or Complicated Animals this year? We're really looking forward to the new year, and to releasing new material. It is pretty hard to juggle touring, and recording. Since I do all of our booking, I'm trying to leave gaps in our schedule for us to record. It's important to have that uninterrupted focus, in order to create and complete the songs. I'll be releasing a new solo album, with songs in English, Portuguese, and Spanish. I'm so excited to get those songs out into the world. I've been really inspired to write about coming together. Not a new subject in the world of music, I realize, but a very important message, with all of the division that is going on in our country right now. Chad and I will be producing that album together. Chad and I are also writing, and fine-tuning the songs that will come out on our upcoming Complicated Animals' album. I'm really loving the way the songs are taking shape.