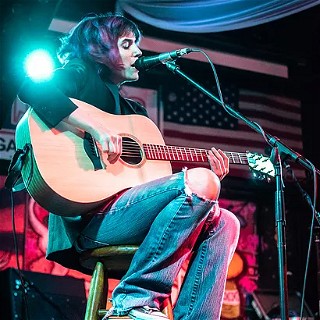 Originally published on August 4, on photopassed.com

GHS (Strings) has been supporting artists of varying styles since the mid 60's when it was founded in Battle Creek, Michigan. Their rosters have included notable acts like Jack White, Skillet, Andrew W.K., and Flea of the Red Hot Chili Peppers. This summer though, GHS is showcasing a different kind of artist: locals. Florida native Alexx Calise (and GHS player herself) is popping up in smaller towns across the country performing an acoustic set and sharing the stage with local bands to the scene.

The return home for Calise was maybe even a little more special than the others, though. As her father joined her on stage playing bass and singing backup. The chemistry between the two may have been the highlight of the show, as the relationship between them truly shines on stage. The two performed songs from Calise's solo discography, letting the music itself choose the path of the set. Calise is candid on stage, letting the audience get whisked away into the performance as she connects with them through jokes and banter, like about losing cool points for taking off her black coat (because it's Florida and despite AC, coats and stage lighting do not mix when it's 94% humidity outside). The song that sparked a seemingly overnight phenomenon for Calise, “Cry,” was performed early on in the set, as the crowd in O'Malleys were undoubtedly hardcore Dance Mom fans. The stripped down live acoustic version truly highlighted Calise's refined vocal capabilities.

“If you don't know this song … get out,” she laughed and pointed to the door as Dad Calise (I'm telling you this man is a natural on stage) strummed into a dynamic cover of the Beatles' “Yesterday.” The final song of Calise's performance is played at every live show, and was written when she was just sixteen. Calise dedicated the song to Selena who was swaying along at the stage as “Morning Pill” closed out the hometown father/daughter collab.

Shortly after jumping off stage, Calise made an announcement to the crowd about what these showcases are all about. Setting out from Los Angeles, Calise is bringing not only locals to the forefront, but the GHS product to the locals. Each band performing received goodies including strings, guitar straps, shirts, and more. Even better, Calise encouraged any musician in attendance to come pick up some strings, regardless if they were playing or not. The familial dedication the brand has for their artists and their communities achieved heavy praise from the crowd.

Up next was Fort Lauderdale's own Shatterglass. Shatterglass formed back in 2011 and have been pumping out old fashioned commercial rock back into the Sunshine State. The band burst onto the stage oozing energy, ready to pump up the Thursday night crowd. Zoog (vocals) moved across the stage with ease, dipping his mic stand low for the ultimate breakdown flair during the choruses. The music of Shatterglass is catchy, with verses building up to complex choruses that make you tap your toes to the beat.

Wasting little time between songs, Shatterglass knocked out a solid forty minute set. The band, consisting of J-Rock (guitar), Donnie J (bass) and RonJon (drums), unleashed infectious grooves over top of their rock and roll base, making the audience bounce around the floor shouting along with the music. Towards the end of the set, Zoog announced they would be playing a special song for the showcase, taking it way back to their garage days with an unreleased track not available on any album. Zoog then yelled, “Let's Ride” which was either the name of the song, or a command for the audience which they took in stride.

Now, we're all well aware by now that I stand behind surf rock vehemently. I mean, we live in South Florida, how can we not appreciate some good old fashioned surf rock? And whats a more perfect genre to close out a South Florida showcase? In 2016 powerhouse guitarist Steve Laudicina kicked off a dream project of his with AJ Kelly (bass) and Rich Conklin (drums) known as Toro Jones. Toro Jones breathed new life into the surf rock scene, blending mixes of rockabilly and garage rock. Their skillful musicianship is at the forefront of their performance, as their tracks are instrumentals. Laudicina and Kelly play back and forth off of each other, taking turns shining at the front of the stage while Conklin pounds away at his kit in the back.

While I couldn't tell you the name of the songs they played, I can tell you it was the perfect closing to the South Florida showcase. The band currently has a six track EP available for digital download, and have teased that an album is coming soon on their social medias. Laudicina's skills on the guitar were amplified by the intense caliber of the GHS Boomers and the remaining fans danced around the floor well into the evening.

Click here to read the original Photopassed article, and check out the photo gallery.