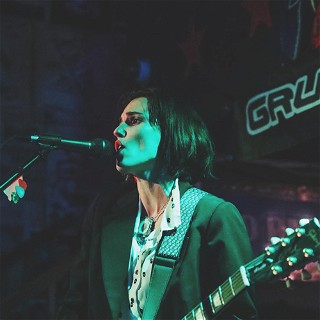 Originally published on May 30, on Rock Revolt Magazine.

Five Star Bar in Downtown Los Angeles was home to the GHS Strings Local Artist Showcase, with part of the night’s proceeds benefiting the nonprofit organization To Write Love on Her Arms. This showcase was a collaboration between GHS Strings and Metal Assault in commemoration of Mental Health Awareness Month (May), featuring the splendid performances of Love and a .38, Batfarm, Ronny North, Cliff ‘Em All, and Dianthus! Hosted by GHS and Batfarm’s very own Alexx Calise, the evening was a fun and fantastic gathering of fans for a Saturday night. Showcase attendees also enjoy the raffle giveaway with plentiful goodies from the night’s sponsors.

“Love and a .38 is a blue collar rock band in an unlikely place. Four guys from different parts of the country, whose triumphs, failures, and drive to play music have brought them all to Los Angeles.” Writes the band’s biography. A fun, energetic, and brilliantly danceable band- Love and a .38 mesh various styles of rock together to create a uniquely wonderful sound. Beloved in the Los Angeles scene, these four performers know how to have a good time! Made up of musicians Ryan Hudson (Vocals), Clark Skelton (Drums), Justin Emord (Bass), and Domo Domaracki (Guitar), Love and a .38 will rock and roll unapologetically all night!

The collaborative music project of recording artists, Alexx Calise and Dennis Morehouse, Batfarm is an emotional, energetic, and absolutely mind-blowingly talented musical endeavor. “Formed over 3 years ago by Calise and Morehouse, who had worked together on the song, “In My Pocket” for an independent film of the same name, Batfarm incorporates elaborate choral harmonies with dysphoric distortion, ominous soundscapes and deeply introspective lyrics reminiscent of rock ‘n’ roll stalwarts Pink Floyd, Electric Light Orchestra, Portishead, and The Cure. NVIG is a concept album deeply rooted in existentialism, and chronicles the demise of the human spirit” writes the band’s official Facebook page. A special treat, Batfarm absolutely electrified the crowd with their performance.

A fun and wickedly cool and instrumental performance, Ronny North and his band mates are absolutely brilliant metal musicians showing that instrumental pieces are just as cool as music with lyrics. With an unmatched skill and fervor, Ronny North and company was the perfect band to play in the middle of the showcase! Playing his own unique brand of instrumental guitar rock, Ronny’s personality was just as epic as his riffs and just as colorful as his guitars!

Arguably the best Metallica tribute band out there, Cliff ‘Em All needs no introduction. Playing music from the Cliff Era (1981 – 1986), Cliff ‘Em All performs in a fashion that anyone could be proud of. Nostalgia swept the night with some of music’s most historic songs. The audience reacted accordingly with immense enthusiasm, starting mosh pits, crowd surfing, and all around rocking the evening away! Made up of members John “James” Hatfield, Chris “Kirk” Buzea, Menno “Cliff” Verbaten, and Dan “Lars” Hegarty on drums, this insanely fun act has been rocking all over California, making a notable name for themselves. Complete with energy, skill, and hair-flipping glory, Cliff ‘Em All drew a huge crowd.

Made up of two sisters Jessica and Jackie Parry, Dianthus is a melodic metal band based out of Los Angeles, CA. “Their music has intrigued listeners with their chaste, melodic vocal harmonies, increasingly ominous guitar tones, thunderous bass, and full-throttle attack on drums. Known for their goth-metal image, DIANTHUS evokes a sense of elegance and mystery to their live performance, as well as an acceleration of high-energy on stage.” Having had their debut album produced by Jinxx of Black Veil Brides, Dianthus is very quickly making a name for themselves in Hollywood. Closing out the evening at the Five Star Bar, Dianthus electrified the crowd and left everyone heading home in a fantastic mood.