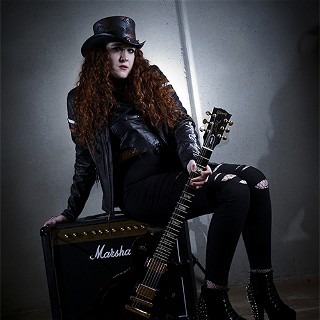 In an age where getting your music out to the masses and interacting with those fans seems a daunting task, GHS Artist Sophia Radisch is on top of it. Alexx Calise caught up with Sophia to talk about being an independent artist, her influences, and how to stay relevant in these social media heavy times.

These days, it’s harder than ever to be an independent artist. I’ve heard that Canada actually gives grants to independent artists to help them along on their journey. Have you ever pursued that route, and if so, where can Canadian musicians apply for one? I have yet to pursue this route, but it's definitely something to consider! What I do know, is that applying for grants is an art in and of itself, and can be a lengthy process. I respect and admire this option for artists like myself. It's surely a blessing in this industry!

Do you have a favorite Canadian musician? There are so many! But to name a few, I would have to say Neil Young, The Band, Buffy Saint-Marie, Leonard Cohen and Joni Mitchell! Their songwriting and legacies are iconic and phenomenal - timeless.

How are the crowds in the US in comparison with the crowds in Canada? It seems that in the US, a lot of people have very short attention spans, and it can be tough sometimes to keep them engaged. I've experienced amazing crowds in both Canada and the US. You have to work in order to captivate an audience. Be true to the music; honor the songs and put together a stellar set, and a passionate, fierce show. This will always win over hearts. A physical performance is made up of vibrations of energy. The relationship between the performer(s) and the audience is symbiotic. Our job becomes presenting what we know, feel and desire through music and transmitting it to the audience; the audience gives back. As far as environment goes, the venue makes a difference!

Everything is so social media heavy these days. What’s your secret to amassing such a huge social media following? Give thanks to the people that believe in you, never stop the grind, and spread loving energy and rock n roll vibes! Nothing brings me more strength, inspiration and joy, than my fans. They are supreme on my musical journey. I'm forever blessed and grateful. My love for each and every supporter is eternal.

How do you continue writing and producing so much music and still have time to promote yourself and create content for social media? I use my 24 hours in each day, wisely. Certain things need to be sacrificed personally, in order to get ahead. My life consists of writing, performing, networking and promoting. You have to hustle. You have to fight to be heard.

Do you have any suggestions for indie artists to keep their touring costs down (such as discount hotel options for example)? Rob a bank...Hitchhike? Joking! There are many fun and safe ways to keep touring costs down. Many nights I've slept in cars with my mama (a.k.a chauffeur)! But most times, I have the good fortune of staying with a friend or fan. I'm forever blessed to call them earth angels in my life!

You have some very big players in your camp, such as Grammy Award Winning Producer, Rob Fraboni (The Rolling Stones, Bob Dylan, Bonnie Raitt, Eric Clapton, Joe Cocker), and Grammy Award Winning Producer, Narada Michael Walden (Whitney Houston, Mariah Carey). How were you introduced to them, and what have you learned from them during the recording process? Rob Fraboni and Narada Michael Walden are two epic, legendary and mega successful individuals; born with extraordinary musical gifts and an undeniable spiritual element, that is embedded deep within their souls. I've learned so much by listening, observing, and analyzing. I'm continuously inspired and eager to learn from knowledgeable greats like them. Rob Fraboni has become a major influence in my musical journey. It's a great, great honor and privilege to know him, to learn from him, and to be working with him. What Rob does for this industry is epic, legendary and an absolute blessing! His philosophy and approach towards recording, and music in general, is a phenomenon. If Keith Richards says he's a genius, he's a genius! I've never been as inspired musically, as I am right now. One of the most important things I've learned from the recording process, is to be true to the music. Be present, thoughtful and passionate in your performance. It's something that comes from inside you. My poetry moves the magic of the instrument. Embrace the process and believe in your abilities. The studio environment is a vital factor, in order to experience and capture this kind of performance.

You mentioned that guitar is your main muse. Any particular reason why you chose guitar over another instrument? I have a deep connection to the guitar. It is most definitely my muse. There's an intimacy about it that makes it a very instrumental songwriting tool for me. And, a performer that feels their music through both vocals and guitar absolutely mesmerizes me, every time. Everything about the guitar is magical! You have absolute freedom as a guitarist. It's very forgiving; in terms of it being a fretted instrument. You can bend the rules through hundreds of techniques used in rhythms, chord progressions, guitar picking, and more. You can even make it a percussion instrument!

So, what’s the deal with the hat? And where can I get one?! Thanks for asking, Alexx! It's an absolute honor and privilege to have American Hat Makers' support for me and my music! A very special shout-out to hat designers Ruby Roxanne, Adam Rose and crew. I'm forever grateful to the owners of American Hat Makers, Hannah and Garth! Their epic and legendary top hats rock my world and speak to my soul!