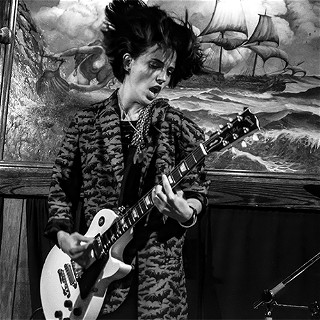 On March 29, 2018, GHS Strings hosted a female artist showcase at the Redwood Bar in downtown Los Angeles, in honor of National Women’s Month. The show featured four duos on the GHS roster: Complicated Animals, Batfarm, Satellite Sky, and Chandler Juliet. Each artist had a unique music style and put strong and talented women in the spotlight.

First up on stage was Complicated Animals, an indie/Brazilian fusion comprised of Monica da Silva and Chad Alger. Da Silva mesmerized the audience with her melodic voice and superior flute skills. Armed with an acoustic guitar, Alger supplied the rhythm and backbone of the music. Complicated Animals stood out from the rest of the acts in the best way possible, supplying the perfect steady start to the evening.

Batman has nothing on Batfarm! This dynamic duo was next to bring their brand of rock and roll to the Redwood, and they commanded the attention of the audience. GHS’s own Alexx Calise is the frontwoman, with powerful pipes and masterful guitar riffs. On drums was Dennis Morehouse, who kept the energy flowing. Batfarm is a band to keep an eye on if you’re a fan of true rock and roll!

Satellite Sky, a brother and sister act from Australia, was next on the bill. This is another band to check out if you like raw, in-your-face rock and roll. Kim embodied pure enthusiasm on drums, making funny faces at patrons, all the while never missing a beat. Pete was just as entertaining on vocals and guitar, making the most of the space he had up on stage. One thing for certain is that America has not seen the last of this Aussie duo!

Last but certainly not least, Chandler Juliet took the stage just after midnight. She mixes rock and roll roots with ‘80’s pop, and the result is a pleasantly upbeat style of music. Chandler hypnotized the audience with her beautiful voice, and even donned her guitar for a few songs, proving that she can do it all. Andre Mohring accompanied Chandler on the drums, and the two took the Redwood from rock show to dance party.

GHS Strings is one of the top guitar string companies in the nation, so it’s only fitting that they would have some of the best artists in their ranks. They put on a hugely successful female artist showcase, which highlighted some of the best female talent in the GHS family. Complicated Animals, Batfarm, Satellite Sky, and Chandler Juliet each brought something uniquely special to the table, and this blending of genres ensured the show had something for everyone to enjoy.