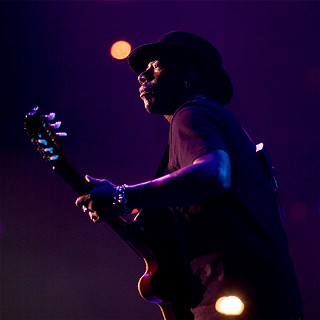 A native of Louisville, KY Tomi grew up as a preacher’s kid listening to the radio and developing a love for the music as well as the artists. His exposure to Gospel, rock, soul and jazz made a lasting impression and perhaps as importantly, made him certain of one thing: he wanted to be a professional musician. Moving to Atlanta in the early 90’s was a big step for Tomi and a step that put him in the right place at the right time to work on his skills as a guitarist and make connections that would serve him well in becoming a part of the explosive music scene in Atlanta. The city was pretty much ground zero for the indie rock and urban music activity and producers such as LA and Babyface, Dallas Austin, Jermaine Dupri, Rodney Jerkins and Speech were turning out chart topping records for already established artists as well as a next generation of urban, pop and rock stars.

Some club gigs started people talking, the local music press writing and Tomi quickly started getting asked to play recording sessions and put bands together to back up new artists on label showcases. Without anyone realizing it, this was the foundation of one of his most valuable skills: the ability to go in the studio and play on the record then get on stage and play the record live with seamless perfection. Studio and stage are two very different worlds and not many musicians can be equally comfortable, and equally effective in both. Tomi easily transitions from studio to stage which has helped develop his reputation as both a session guitarist and musical director for concert tours, television specials and feature film projects. Producers and artists are comfortable and confident that he can help make a great record in the studio and then assemble and rehearse the musicians to take the record to the stage or screen.

As musical director or co-md, Tomi has helped find the right musicians and shape the live shows of Madonna, Outkast, Toni Braxton, TLC, T Pain and Justin Bieber (including Justin’s feature length film Never Say Never), as well as for television programs and specials such as the Soul Train Awards.

Tomi lives in Atlanta, spends a lot of time in LA and is always looking for exciting creative projects to work on. As a session and touring guitarist, musical director and songwriter he has a lengthy list of credits and a well earned reputation as the first call for artists and producers when they get ready to make the record and hit the stage.