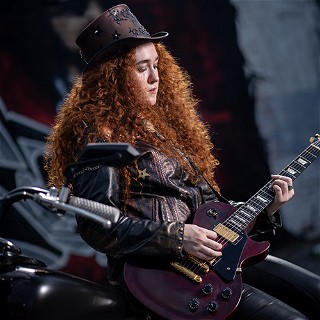 Sophia Radisch (born July 6, 1998) is a Canadian Professional Independent Artist. She is a singer/songwriter/musician and actor from Ottawa, ON Canada. She is a member of CFM/AFM (Canadian & American Federation of Musicians); SOCAN (The Society of Composers, Authors, and Music Publishers of Canada); SAC (Songwriters Association of Canada); and CARAS (The Canadian Academy of Recording Arts and Sciences).

Sophia was confirmed for the iconic and legendary Canadian RBC's Bluesfest City Stage, 2020 and 2021. She was scheduled to perform on the main stage. RBC's Ottawa Bluesfest is ranked in the world's top ten most successful music festivals (Billboard Magazine). Due to the Covid-19 pandemic, Sophia has been re-confirmed for Bluesfest 2022.

Sophia has made guest appearances at the Gibson Guitar/FOX5 Studios in Las Vegas, Nevada, and has performed at world renowned venues in Hollywood, California.

She performed at the Guinness World Record "Longest Running Music Concert by Multiple Artists," which was awarded in 2018 by The Guinness Book of World Records.