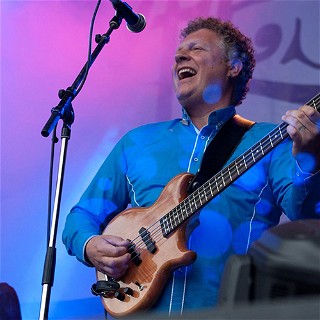 Shortly after being ‘pushed’ on to bass when he and a few school mates formed their first band Scott witnessed the slap-wizardry of Level 42’s Mark King!  Seeing the incredible up-front slap and pop antics of Mark stirred up an excitement and vision in Scott that is still with him to this day!

Scott was playing paid gigs at the age of fifteen and shortly after enrolled at Nelson & Colne College to study music.  Around this time he became aware of players like Jaco Pastorius, Marcus Miller, Stanley Clarke, Billy Sheehan and Stu Hamm. All these players had a massive influence on Scott’s playing and attitude to music. The most profound influence was Jaco’s playing on Joni Mitchell’s Mingus album! This album taught him that although the bass is lower in register, it’s simply another melodic musical instrument.

At the age of 18 Scott was regularly playing Jazz gigs wherever and whenever he could. At the weekend he was now playing with a very established covers band which, as well as keeping the wolf from the door, was invaluable experience and really pushed him to be an entertainer – not just a static musician!

Already a successful bassist, Scott began working part time as a recording engineer at a local studio. Whilst there he engineered and co-produced several commercial CDs. After some ten years this led to him being offered a post as a ‘Music Tech’ tutor at Blackburn College.

Scott is the current bassist with Scottish band Big Country. Although busy much of the time touring, he continues to also work as a session player, bass tutor and producer of free online bass-related content.