The 4 string set I have is incredible.

I would like to echo the opinions of others; more gauges!

I have a custom 7 string acoustic bass, 32-30” fanned fret that sounds unbelievable with these on. However, a 120 low B, even with the material adding more mass and therefore tension, is toooo small (even on a 34” in my opinion, let alone anything smaller).

I would give my right foot to be able to string my Acoustics, from 4 - 7, with these… and actually my electric 4 - 7 too.

I have enjoyed these a lot on my Furch 5 string long scale with low B tuning.  Any chance at all you will be making a short scale 5 string high C set (or even a short scale 6 string set would work)?  Would love to put them on my Kinal Kompact.

Hi Ken, that's always a possibility. We'd have to do some research to see what kind of market would be out there for such a thing and go from there.

Being a flatwound player, I was expecting these to be flatter than they where. That's not a bad thing though. When I got my Fender CB-60SCE (which came with Fender 7060 Phosphor Bronze Acoustic Bass strings), I replaced the strings immediately. I wasn't expecting the "nails on a chalkboard" sound that came with them. Plus, they were heavily corroded right out of the box. I replaced the strings with La Bella 750G Deep Talkin' Bass Gold White Nylon Tapewound strings. While this instantly eliminated the terrible sound, the tension was so low that I felt like the strings were just laying on top of the bass (heavy exaggerationI). I chose those strings because of the reported brightness. This was totally true. But, since I dig in way too hard (I'm breaking that habit thanks to my compressor), i kept fretting the strings off the sides of the neck. I also had to play much harder if I wasn't playing on an amp.

Saying that, I knew I needed a higher tension string, but didn't want to lose that acoustic sound. I didn't want to go back to the "bag of cats" screeching sound though. This is where these bad girls come into play. The tension is much better than the tapes, but, like I said earlier, I thought they would be flatter. For a second, I thought I was sent the wrong strings in the right packaging. I think I was expecting halfwounds. Needless to say, my eyesight is crap. So, I took the snips from the end, and took a picture with my phone and blew it up. Never trust your senses lol. They're much flatter than roundwounds. The best part about this? No finger sticking to flats from the extra surface area and heat from the hands. So, now I get the bonuses of roundwounds with less noise.

Being a noob at this, is there any tips anyone can give me to avoid corrosion? Anytime I'm window shopping or am in forums, I'm going to recommend these strings for acoustics, without a doubt. If I wanted to hear annoying screeches, I would call my ex-wife. 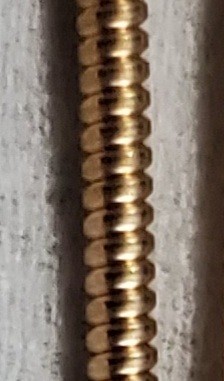 Hi Larry, I'm glad you enjoy the Pressurewound Bronze so much! They're definitely "rougher" than a set of flats, but still very easy on the fingers. And as you said, no "nails on the chalkboard" harshness or overtones! I can't stand those either.

Sadly, phosphor bronze strings are going to tarnish; it's the nature of the material. You could keep them wiped down and clean, and put the bass in a gigbag/case when not in use and that will all help delay the process. Thankfully it doesn't affect the sound of the strings.

GHS Bronze Pressure wounds are the BOMB! I have them on 3 of my Basses and I'm ordering another set for a 4th. The tone is somewhere between mellow and a growl, considering how pluck the strings, I can get any sound I want!

Exactly what I was looking for, strings that have multiple personalities!!

I appreciate the kind words! A lot of thought went into that set, and I'm glad that it's been so well received.

Flats on an acoustic bass ARE pretty cool! You lose a little of the volume and nuance of the acoustic-electric, but that's usually not an issue for many.

Hi Jonathan Moody but the cool thing about Flat wounds is that they won't scratch the Frets nor Fingerboard meaning that the instrument will be in better shape. These are basically Balanced Bass Strings in Bronze.

Oscar, that is such an overblown myth. Technique and maintenance will play a much bigger role in how well the frets/fingerboard survive over the years. To pick a set of strings solely for that reason alone is a shame, where the player is missing out of a lot of great tone options.

And yes, these ARE balanced bronze bass strings; I designed them as such. The rollerwinding was due to people loving the sound of bronze strings on an acoustic bass, but hating the string noise that comes with that material. Having them play a bit better with the frets/fingerboard was a bonus.