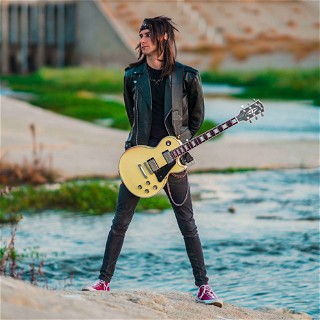 Originally from Fenton Michigan, Michael Rodd began his career in 2015 after moving to Los Angeles to pursue music. In late 2015, he and his singer formed FIRA, an LA based theatrical metal band. FIRA then toured Italy in 2016 and recorded their first songs together while overseas.

Michael/FIRA released a music video in 2018 to go with one of the most popular of these songs.

In 2018, Michael also helped form Las Vegas based band, Danger Love. Danger Love has since then performed with Jacky Vincent, Led Zepagain, Taking Dawn and many others at venues such as the Las Vegas House of Blues, Backstage Bar and Billiards, and LV Beauty Bar.

Michael is currently in the studio with FIRA, preparing for an upcoming full length album release, and planning a tour to follow the new album.

Keeping busy, Michael has also performed with other bands around Las Vegas and Los Angeles such as Dr. Rock and Wikkid Starr, opening for bands such as Faster Pussycat, Dokken, LA Guns, and even performing at the Laughlin River Run motorcycle festival.