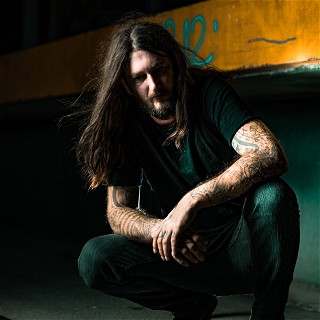 In 1995, while living in Richmond VA, Kris Norris met Ryan Parrish through their good friend, Cory Smoot (late guitarist of the band Gwar). With Kris expressing his guitar skills and Ryan accompanying on drums, they would go on to form a death metal band called Gutted. A few years later, Kris traveled to Oslo, Norway where he fell in love with Scandinavian death metal. This became his inspiration to form Disinterment whose notable members included Ryan Parrish on drums and Kris’ friend Tommy Gunn on guitar (formerly of Immortal Avenger). Gunn and Norris would later form a band called Narsilion.

In 2001, Kris helped form Locus Factor; which he continued to work on after joining Darkest Hour providing his passion and experience in completing their 3rd full-length record, “Hidden Hands of a Sadist Nation”. After touring for several years with Darkest Hour, Kris parted in order to pursue a career in metal production. In January 2009 Kris released his first solo album with the Kris Norris Projekt. The album “Icons of the Illogical” was released on Magna Carta Records.

Kris provided production and guest lead guitar tracks to an album by the Washington DC based band Fierce Allegiance, as well as a guest guitar solo on the God Forbid track “Earthsblood”, from the same album. In 2009, Kris formed another liaison with vocalist Dan Malloy for the creation of The Godless Symphony. In the summer of 2010, Kris started recording Condemn the Infection’s, his first full-length album.

Kris was asked to stand in as a temporary touring guitarist with Threat Signal after their previous guitarist, Adam Weber, left the band in July 2010. In November 2010, he filled in on guitar for Straight Line Stitch after guitarist Pat Pattison temporarily left during their recent tour with Soulfly, only to be asked to officially join in March of 2011.

In April 2012, Kris filled in on guitar with his previous band Straight Line Stitch on a summer tour with the addition of new band members.

In 2013, Kris announced a new band with Darkest Hour’s ex-drummer Ryan Parrish called Blisskill. A song demo has been posted on his SoundCloud. Recently, an IndieGoGo campaign was started to fund the recording of their debut album.

Kris Norris is also known for being the former guitarist for Scar the Martyr and assisting with the writing and production of Vimic’s current release Open Your Omen.

In September 2016, The real news here is that for the first time since 2008, Kris semi-rejoined Darkest Hours and will be collaborating with the band on their new album! Kris was in the band from 2002 to 2008, and performed on and wrote for Undoing Ruin, Deliver Us, and Hidden Hands Of A Sadist Nation. Darkest Hour says Kris is there to collaborate on a few tracks and “possibly a guest solo or two.” Here’s what Norris had to say.

“When the guys contacted me about the idea of a collaboration, I was excited because it has been a really long time since I’ve worked with them all. I’ve stayed in touch with them over the past years and it’s really awesome to see that they keep trying new things on every album and growing musically. I’ve always felt there was a really good writing chemistry and it’s awesome to see that it’s still there.”

In June 2017, The Devil’s Bastards announced a new lyric video for the single “To The Lost”. The song comes off the band’s self-titled debut album which was produced by Kile Odell and Kris Norris with select songs co-produced by Drew Fulk and Jamie King. The lineup includes Kris Norris.

In March 2018, he announced a project he wanted for ages to be released and it is finally happening. SHADOW DOMAIN, his project with Benjamin (ex-Sybreed) has been officially announced on July 30th, 2018.