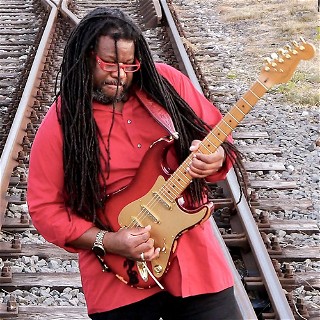 Khalif "Wailin' " Walter without a doubt belongs to the the new generation of Blues players coming from the Windy City and contributing to it's rich legacy of the Chicago Blues. This definitely ain't your grandaddy's Blues though. Khalif's music, while firmly rooted in the Chicago electric blues guitar tradition is fused with elements of Funk, Soul, Rock, and Reggae to create his own kinda funkin' boogie groove. With his newly released Nothin' Left To Lose" (Pepper Cake Records) and the 2012 CD "She Put The Voodoo On Me," he has garnered international recognition and acclaim.

Khalif “Wailin’ “ Walter's electrifying live performances have lit up the Chicago Blues music scene and stages throughout Europe with his unique style of Funk drenched Boogie Blues that rocks the house down to the ground. So where have you seen him? Khalif “Wailin’ “ Walter appeared regularly on the Chicago Blues circuit, and performs in venues and festivals throughout the U.S., E.U. And Africa.

Khalif “Wailin’ “ Walter is a guitarist, singer, bandleader, and songwriter. The son of military parents, he grew up travelling the world. He first picked up a guitar at 17 years old. Due to an entirely chance meeting of B.B. King, where B.B. was kind enough to give him a half hour lesson, Khalif knew right away, "This is what I want to do,". He worked and travelled with cover rock bar bands until he passed through Chicago. He settled in Chicago in the late 80's after as he puts it,"Chicago chose me. I was there for only 1 day and I visited the Kingston Mines and the Wise Fool's Pub. The music totally blew my mind. Chicago said that's where I needed to be, and that is and always will be home for me. I quit the travelling rock band the next day, sold everything, and bought a one way ticket to Chicago. I had no Plan B,". Khalif struggled at first to gain recognition and earn the respect of other musicians often going 5-6 nights a week to jam sessions or as he calls it "Blues University". Khalif developed his approach listening to Dion Payton with his psychedelic trance blues rock amalgamation and the Kinsey Report who mixed both funk and reggae with deep Chicago Blues groove; like in the music of modern day Blues icon Gary Clark Jr., many musical elements can coexist and be branches of the tree that is Chicago Blues.