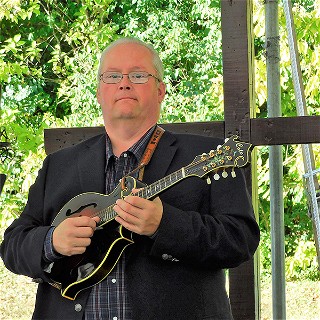 Kevin Prater comes from Blecher, Kentucky, originally from Grundy, VA. He was born in the heart of bluegrass music country and at an early age his life's direction was determined. At age 4, Kevin's Uncle, Boone Estep began encouraging his to play and sing. By age seven Kevin had made his first professional public performance. By age 11 Kevin had mastered the Banjo, Bass, Dobro, Mandolin, Guitar. He formed "Elkhorn Grass", touring for over eleven years, during which time he was named an "Honorary Kentucky Colonel". Kevin then became joined the house band at Dollywood for three years.

In 1998 Kevin began a world wide journey that would last over twelve years. He became Mandolin Player and Tenor Vocalist for the James King Band. Kevin quickly became known as the "Machine Gun Mandolin Player" and highly respected for his incredible High Tenor vocals. During his time with James King, he was blessed to be part of two, "Album of the Year" and one "Song of the Year" award winning projects, as well as many other awards. Feeling the urge to move in a different direction, Kevin Prater then became Banjo Player for the Bluegrass Brothers for three years, earning a nomination as "Banjo Player of the Year".

For many years, fellow band member Tom Timberlake encouraged Kevin to once again step into the leader position, again fronting his own band. In 2009, The Kevin Prater Band was formed. They hit the road picking and have never looked back. Kevin has filled the band with seasoned veterans of Bluegrass and life long friends. Their unique sound, though strongly influenced by early Seldom Scene and The Country Gentleman, is built around Kevin's vocals and instrumental talents. Their acapella renditions are a frequently fan requested.

On July 4, 2015, The Kevin Prater Band was recognized by the House of Representatives of the great state of Kentucky with "Citation of Achievement" honoring the success of their Full Gospel CD, "Were You There".

Kevin gives credit for their success t the supporting members of The KPB. Tom Timberlake on Guitar, has played with many great bands in his career. Tom was the last Lonzo of the world acclaimed Grand Ole Opry comedy duo, "Lonzo and Oscar". Danny Stiltner on Bass, formerly of Tommy Webb Band. He is son of the legendary Bass Player, Blake Stiltner and father of Danny Ray Stiltner, former Bass Player of Dave Adkins Band and Republic Steel. Adam Burrows with his fast paced, high energy, fancy footed Fiddle playing is a non stop entertainer. Adam comes to the band with a huge resume having played with Eddie Gill, Lonesome Will Mullins, Dewey Brown, Nathan and Ralph Stanley. Jake Burrows on Banjo and Dobro. Younger brother of Adam, is equally blessed a strong resume. He has toured with Travis Chandler, Kody Norris & Watuga Mountain Boys, Lonesome Will Mullins and with Adam as The Burrows Brothers. All members play multiple instruments and contribute to the bands highly appreciated harmonies.

In October The Kevin Prater Band signed by Tom Mindte of Patuxent Music recording label. In January 2017 recorded their first CD "All I Ever Wanted" for the Patuxent. Currently touring the USA and Canada, promoting that soon to be released project. For booking The Kevin Prater Band, contact Stacey Wright at 740-641-7884.