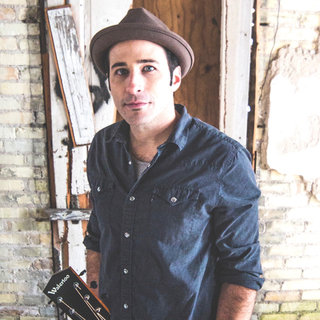 Speaking or singing, the voice of Joshua Davis is a disarming instrument: weathered and warm, as capable of conjuring confessional intimacy on a global stage as it is of making a small room, well off the beaten path, resonate with startling urgency and power. Couple it with an earnest poetic sensibility, a boundless work ethic, and an uncanny gift for connecting with audiences spanning generations, and it’s no wonder that Davis is now poised at the brink of the sort of widespread recognition that typically passes right over such a humble troubadour.

Over the past fifteen years, Michigan-based Davis has honed an impressive range of skills – songwriter, bandleader, guitarist, and vocalist among them – in the most honest possible fashion: night after night, song after song, show after show Davis simply delivered every performance as though his life depended on it. Investing himself in the American musical diaspora, he has explored the common thread connecting folk, blues, jazz, ragtime, and country forms – discovering his personal perspective as a composer in the process.

“My sound is rooted in the folk tradition,” Davis explains, “but it’s not folk music. Terms like Americana, roots rock, and heartland rock come up, but there’s so much more to it than that. I’m not a purist: I play with that American folk lineage, I play with those metaphors.” His versatility and ravenous musical curiosity has resulted in a divergent output, from his five albums with roots rock outfit Steppin’ In It to the vintage swing styles documented on the album he recorded with Shout Sister Shout.

But Davis’s sensibility shines brightest on his trio of solo albums, each a thoughtful dispatch on life, love, change, and growth, culminating with 2013’s A Miracle of Birds – which was inspired by a life-changing voyage to Middle East in the Palestinian West Bank to raise money and awareness for fair-trade olive farming communities in Palestine’s West Bank. Contrasting his identity as an American Jew with the struggles he observed in the Middle East, Davis crafted a suite of songs that works not only as a traditional album, but as a provocative and dynamic concert program that he presented in schools, clubs, and theaters.

Following the release of A Miracle of Birds, Davis could well have continued his journeyman existence, gradually growing his audience one show at a time as he and his talented bandmates tirelessly careen up and down the highways between home and the next gig. Instead, what happened next was an unlikely convergence of a contemporary pop phenomenon and his decidedly old-school methodology, while handily proving the old adage that there is no such thing as a genuine overnight sensation.

Davis almost didn’t audition when the popular NBC musical showcase The Voice called. “I’d never even seen the show. Looking at music in a competitive way is totally against the way I was raised,” he says. “Collaboration is what it’s about. Music brings people together. So the competitive aspect of it was really foreign – to be judged like that.” From his first performance, Davis triumphed, and over the course of the season, his rootsy, sincere approach emerged as a refreshing alternative and propelled him all the way to finals.

“Looking back, it was good to be under the gun for a little bit, to look closely at the way I perform,” he recalls. “I didn’t think of myself as a singer before this happened – I thought of myself as a songwriter first. My goal throughout the whole surreal experience was to just maintain the respect and integrity that I’ve staked my career on so far. The amount of support I received from new and old fans has been mind-blowing. A lot of people were just happy that the kind of stuff I do reached the mainstream, and that I actually got an original piece of music [his stirring ‘The Workingman’s Hymn’] on the show.”

The unexpected gift of an instant national audience has given Davis a rare, once-in-a-lifetime opportunity, and he is careful when considering its implications and possibilities. “The people who have been with me for the past fifteen years understand this wide scope of American music that influences everything I do,” he says. “I want to show my new listeners this range – which wasn’t always on display on the show.”

The combination of his recent success and his long journey to get there is inspiring a new batch of songs, still in their “larval form,” as Davis puts it. But he’s still doing things as he always have: Walking into the studio with his guitar, his songs, and his band, counting off, and rolling tape – taking the performance live off the floor, with little post-production sweetening.

“More than anything else, it’s really important to me to show people that you don’t need to rely on studio tricks and cheats to make a great album,” he says. “The music I love is raw and organic and it’s perfectly flawed. If more people are listening, I’d like that to be highlighted a little bit more. That’s where I see my place: Playing music that’s a little more raw, that’s a little more organic, that lives and breaths. And also that’s timeless in some way.”

“More than ever,” Davis concludes, “I want to put everything I can into the music I write and the music I make. I’m proud of what I’ve done in the past, but this has made me look at my life and my work differently. And what it comes down to is the people around me: The people I’ve met, the people who supported me from the beginning and during The Voice – the people I’ve been around, the people I’ve been exposed to, the support, the community that surrounded me, my family – the way they sacrificed and helped set me up. I want to make the most of this.”