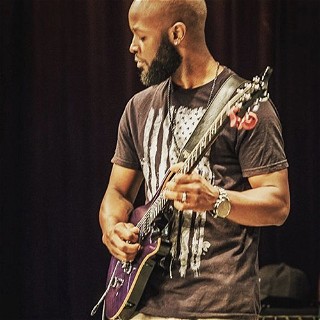 Isaac "Ike" Thompson is a self taught lead guitarist! He was born and raised in Cartersville, GA. with his brother, James "JT" Thompson Jr., who also plays the bass guitar. Isaas started teaching himself how to play guitar by ear at the age of 16. As other musicians became impressed with Ike's natural talent and ability to learn music quickly, he began playing in several chruch bands. Isaac's great reputation started to reach new heights and he began touring with well known artists by age 25. Artists such as Lloyd, Musiq Soulchild, Monica, LaToya Lucket (Destiny's Child) and Ciara. Isaac has also had great success national and internationally with his jazz fusion band, The4Korners. The4Korners has done countless shows nationally, and has played in famous international venues, such as Ronnie Scott's in the U.K., and has recently done shows in Indonesia. Isaac is very pleased to have the opportunity to represent the GHS family!