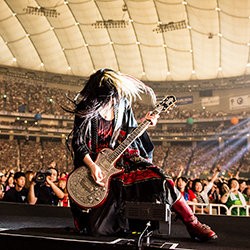 HISASHI is a guitarist of GLAY.

Since their major debut in 1994, GLAY has been leading the Japanese rock music with their CD sales and the number of audiences to their live concerts, and is one of the most famous rock bands in Asia.

Especially the “GLAY EXPO’99 SURVIVAL” Live held in Makuhari Messe in Chiba）on July 31st 1999 drew 200,000 audiences in total and it has been both national and world records. During their 20th anniversary year, 2014-2015, a large scale live “GLAY EXPO” which drew the biggest number of audience in the north east in Japan was held, and they concluded their 20th anniversary with a live shows at Tokyo Dome which drew 100,000 audiences in 2 days. GLAY, the band continues to accelerate with growth and success.