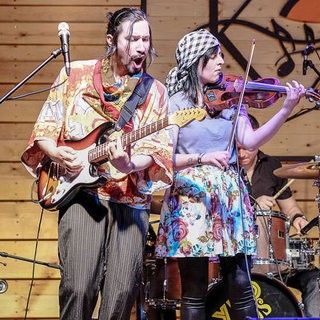 Autumn 2011, five musicians with radically different social and music backgrounds created the "Gypo Circus" Band. All members had this dream to create a band where Balkan ethno, gypsy and punk genres come across, even know they do not create any new style, but they built a never heard sound in Hungary.

The Gypo Circus sounding brought a new colour into the Hungarian folk-ska-punk palette wich music style was booked banal until this band started to create music. Imagine the following unreal story: basics of gypsy jazz music with Django Reinhardt and his violinist friend, Stéphane Grappelli gets up and conspire with the Manu Chao Band, and they invite Tibi Kiss as a singer, who was effected very deeply by the Balkan. As an association add to this all the milieu of Kusturica's films, but sometimes Guy Ritchie's gypsy camp from the film Snatch also comes up. The band's three main preference: amazing knowledge of music, serious composing talent and very well done lyrics. Do you need anything else?

Dynamic on stage! Energy, bounce and a great show…

In the past years the band had tons of succesfull gigs around the country. They always give joy for the crowd with their energetic stage-performances. The band is headlining at the biggest hungarian festivals such as Fishing on Orfű, EFOTT, FEZEN, SZIN, The streetmusic festival of Veszprém and more Gastro Festival. They were on tour with Ganxsta Zolee and the Kartel, and were the guests of Firkin, the Bohemian Betyars, and Punnany Massif too. Their first, indie EP came out in 2012 on the title of Szabad-e a szerelem. Under the record label called 1G Records, an extended version of the EP came out on the 11th of October, 2014 with some extra acoustic versions of the original EP songs (Villanyos+Akusztixxx LP). The debut concert of the LP was in SO36, Berlin before the gig of RotFront. The band earned radio plays all around the country with the record and one of the biggest hungarian radio stations – MR2 Pefőfi Rádio – invited them to perform in the show called Akusztik. They first music video was made in the september of 2014 for the song, Feledd és táncolj.