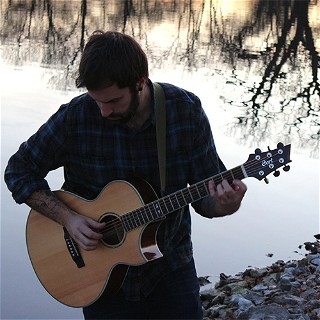 Dustin Prinz was born and raised in a very rural area of Nebraska. Dustin's rural upbringing gave him an interesting take on life, pushing the boundaries of alternative acoustic and producing an engaging view of his world.

Dustin Prinz is an extremely prolific songwriter with a powerful vocal and a unique performance style. His guitar playing is a blend of hybrid picking and guitar tapping developed during his days as a drummer. Dustin calls his style "Parapicking". Dustin’s playing style captured the attention of the folks at Jamplay.com and he was hired to teach a very popular series called "Parapicking For Knuckleheads".

Dustin Prinz recognized, early on, that Youtube would be a useful vehicle for his music. Dustin has spent countless hours producing content for his Youtube channel and he has been rewarded with more than 7 million views with over 30 thousand subscribers. Dustin creates and edits every video enabling him to completely realize his vision for each song.

Dustin Prinz enjoys touring and performing live shows. A Dustin Prinz show is a must-see for anyone who appreciates outstanding guitar work, creative song writing and a totally entertaining performance.

Dustin Prinz on his influences and inspiration. "I have worked very hard to develop a unique musical style and I am happy to admit that I have drawn inspiration from many of my favorite musicians: Michael Einziger of Incubus, Bon Iver, Travis Meeks of Days Of The New, Jason Mraz, John Mayer, Tommy Emmanuel, Rodrigo y Gabriella and John Gomm. My entire reason for being is to encourage others to find their passion and take a chance. There really isn’t anything more gratifying than waking up to work on something you love. When I get a message from a fan, describing how one of my songs has inspired them to pick up the guitar - I am reminded why I do this".