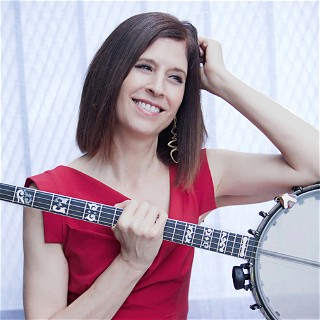 Multi-award-winning instrumentalist/vocalist/bandleader Cynthia Sayer is acclaimed by musicians, critics, and fans alike as the top 4-string banjoist in the world today. Praised for her “drive and virtuosity” by The New York Times, Cynthia tours extensively with her bands and as a guest artist across four continents.

An inductee into the American Banjo Hall Of Fame and appearing on the cover of next month’s International Musician Magazine, she is the first banjoist to win the 2019 Bistro Award and 2018 Global Music Awards. In 2018 Cynthia was also the first 4-string jazz banjoist ever featured at the iconic Newport Jazz Festival.

Cynthia has appeared as a guest and performer CBS, FOX & ABC network television, on NPR's “Piano Jazz,” and elsewhere. Her work has been featured in The New York Times, DownBeat, Fretboard Journal, People Magazine, The Wall Street Journal, and countless other local, trade, and foreign media outlets.

A multi-instrumentalist heard on distinguished feature film and TV soundtracks, Cynthia is comfortable in many genres. Her feature CD's, nine in all, have received rave reviews and multiple "Best of" nominations and awards in various categories. Sayer has played for two U.S. Presidents (once at The White House), performed with several symphony orchestras including The New York Philharmonic, was the official banjoist for The New York Yankees, and is proud to be the subject of a Trivial Pursuit game question.

Cynthia is also an avid educator, presenting clinics, programs, and lecture/demonstrations at schools, colleges and cultural organizations, including educational concerts for Jazz At Lincoln Center. Her play-along program, “You're IN The Band,” is popular with players of all instruments learning and practicing traditional/hot jazz and swing.