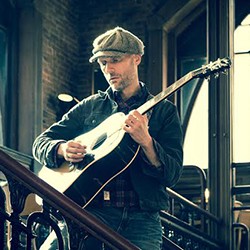 Bruce Gregori is an American guitarist from Hartford, CT, United States. As a virtuoso guitarist, he has performed for over 35 years dazzling audiences with his soul and feel approach to playing guitar and with true “non-stop” and “all energy” shows throughout the United States and North America, Europe, and The Mediterranean. Bruce has performed on some of the greatest event stages graced by a multitude of major international recording artists and entertainers. He has not been short on inspiration in his musical direction. In his early teens, Bruce was invited to play at one of Massachusetts oldest jazz, blues, and rock venues, Theodore's Blues, Booze & BBQ with the legendary Billy Arnold and Taj Mahal. Shortly after, he was invited to play and study with jazz legend Jackie McClean. As Bruce states, “Jackie, was the greatest musician, not to mention person, I have ever had the honor of meeting. Every time I was with Jackie he would always say, don't forget to keep the music alive.”

With the music relationships Bruce developed in Hartford , CT with Jackie McLean, he was able to attend HARTT School of Music reunited once again with Jackie and later jazz pianist Jaki Byard. Throughout his time there he had the honor of playing with the great drummer and percussionist Al Lepak, and later jazz saxophonist Antoine Roney (brother of Wallace Roney). He went on to hold multiple standing performances at the acclaimed Berklee College of Music in Boston, MA which helped him launch into the second phase of his professional career working as a session player, recording contractor, and later live performance guitarist within a multitude of musical genres.

In 2011, Bruce created the Gmusic Label as vehicle to record and release his music. With the label and the embedded teaching of his early blues and jazz heroes to his later session work in progressive rock, funk, blues, and alternative music, Bruce released his first solo CD titled “Acoustic Strings” (Gmusic,LLC 2012). This was followed by the heavily progressive influenced CD “Burned Sound Beyond The Ground” (Gmusic,LLC 2013) featuring highly technical virtuoso guitar work, with a splash of infused blues from the past.