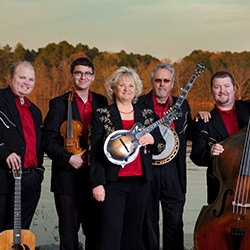 Their previous release, Back To My Roots, achieved commercial and critical success, charting on Bluegrass Music Profiles TOP 30 SINGLES, and TOP 10 ALBUM Chart and reaching #1 on the Bluegrass Unlimited Charts.

The band’s distinct sound and old time flair can be attributed to the bluegrass-rich area of North Carolina from which they hail and borrow their name. As the founding member and band leader for Carolina Road, Lorraine Jordan’s showmanship and chemistry with the audience makes the group one of the most popular bands among bluegrass fans today. Lorraine, who has garnered two IBMA Awards, has fronted Carolina Road for over a decade and has eleven national recordings to her credit. The band has earned a reputation as one of the hardest working bands in bluegrass. Carolina Road plays worldwide and headlines two National Bluegrass festivals, Christmas in the Smokies and Cherokee. They have hosted the Canadian Bluegrass Awards, toured Europe and played twelve Blue Grass cruises. Carolina Road’s performance is a traditional sound with a fresh approach which includes invigorating instrumentals, smooth blending vocals, and all the energy that you can stand.